"You only get one chance to do it right. Try not to screw it up."

Thus were the words that subtitled Bryan Cristina’s presentation (PPT) on campaign tracking at the December Web Analytics Wednesday in Columbus last Wednesday, sponsored by CoreMetrics, Analytics Demystified, and SiteSpect at BJ’s Restaurant in Powell. 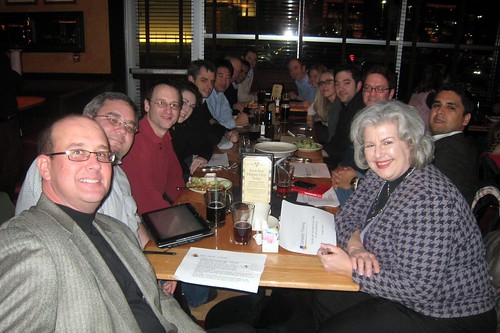 When it comes to screwing things up, we certainly had our opportunities:

Thanks, I assume, to some more proactive promotion of the event (Dave Culbertson of Lightbulb Interactive accounted for at least half of the first-timers), we had record attendance. Combine the turnout with the fact that we were in a shared space, and we had less-than-ideal conditions for Bryan’s presentation. He brought a handout (PPT) and managed to semi-holler for a few minutes to quickly walk people through it. That was unfortunate, but I do think we are at least learning that we may have to settle for lesser quality food and a limited beer selection (read: The Spaghetti Warehouse) when we have a presentation.

Nevertheless, the presentation had some great information. And, some great lines that are typical Bryan-funny-caustic:

We had some first-time attendees I was pretty excited about:

List of tweeters in attendance who I could identify:

And, finally, I learned that there is apparently a Monish Datta fan page. Unfortunately, I couldn’t find it. So, I’m stuck just linking to Monish’s LinkedIn profile. But, hey, in the process of looking, I realized that last month’s post got me some serious Google Love on “Monish Datta” search results.