Ever since Data Studio released scheduling, I’ve found the feature very handy for the purpose of alerts and performance monitoring.

Prior to this feature, I mostly used the in-built Alerts feature of Google Analytics, but I find them to be pretty limiting, and lacking a lot of sophistication that would make these alerts truly useful.

Note that for the purpose the post, I am referring to the Alerts feature of Universal Google Analytics, not the newer “App+Web” Google Analytics. Alerts in App+Web are showing promise, with some improvements such as the ability to add alerts for “has anomaly”, or hourly alerts for web data.

Some of the challenges in using Google Analytics alerts include:

You can only set alerts based on a fixed number or percentage. For example, “alert me when sessions increase by +50%.” 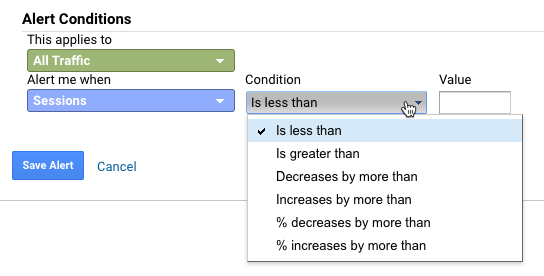 The problem here is that if you set this threshold too low, the alerts will go off too often. As soon as that happens, people ignore them, because they’re constantly “false alarms.” However, if you set the threshold too high, you might not catch an important shift. For example, perhaps sessions dropped by -30% because of some major broken tracking, and it was a big deal, but your alert didn’t go off.

So, to set them at a “reasonable” level, you have to do a bunch of analysis to figure out what the normal variation in your data is, before you even set them up.

What would be more helpful? Intelligent alerts, such as “alert me when sessions shift by two standard deviations.” This would allow us to actually use the variation in historical data, to determine whether something is “alertable”!

Creating alerts is unnecessarily duplicative. If you want an alert for sessions increase or decrease by 50%, that’s two separate alerts you need to configure, share with the relevant users and manage on-going (if there are any changes.)

Only the alert-creator gets any kind of link through to the UI. You can set other users to be email recipients of your alerts, but they’re going to see a simple alert with no link to view more data. On the left, you’ll see what an added recipient of alerts sees. Compare to the right, which the creator of the alerts will see (with a link to the Google Analytics UI.) 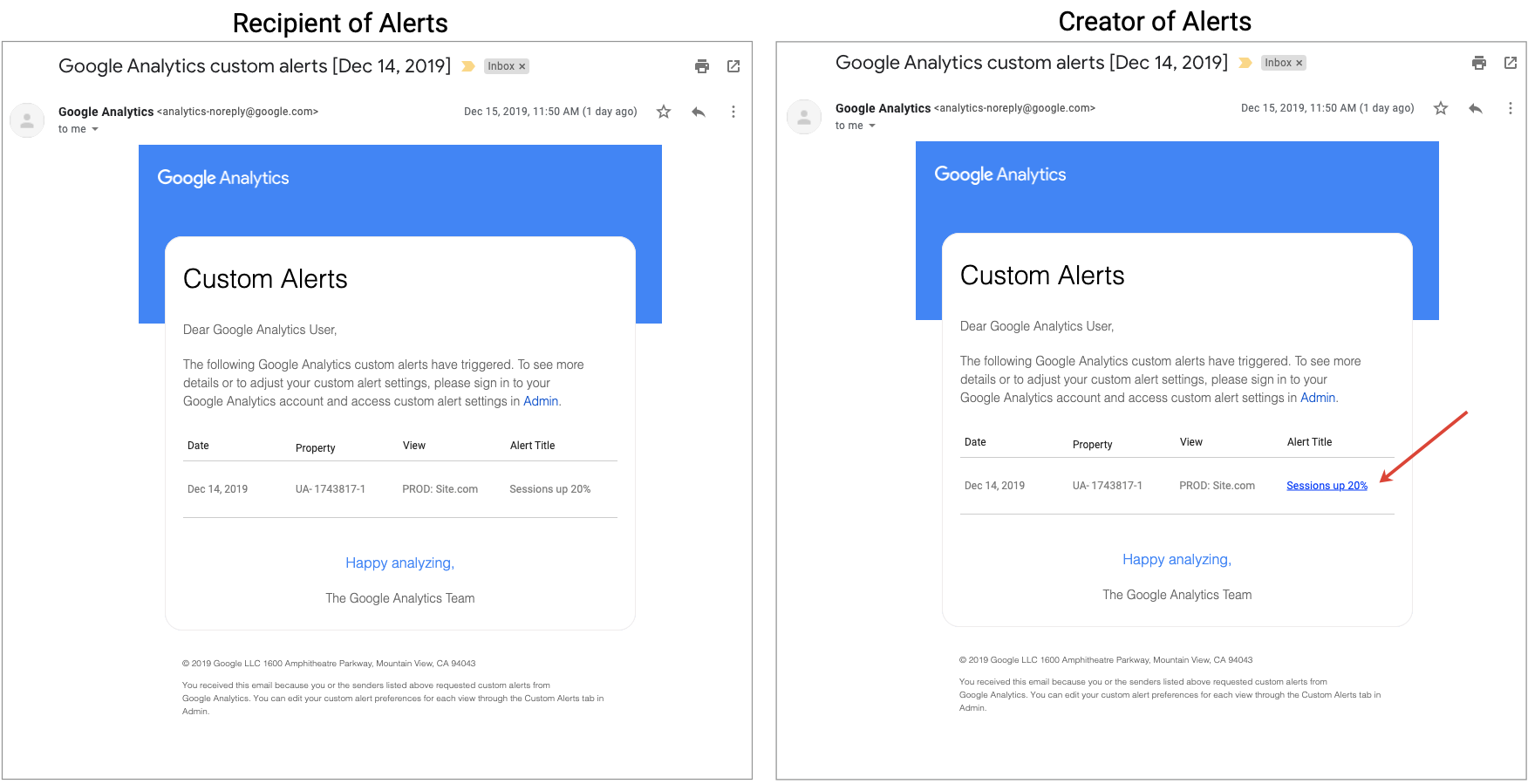 The lack of any link to GA for report recipients means either 1) Every user needs to configure their own (c’mon, no one is going to do that) or 2) Only the report creator is ever likely to act on them or investigate further.

The automated alert emails in GA are also not very visual. You get a text-alert, basically, that says “your metric is up/down.” Nothing to show you (without going in to a GA report) if there’s just a decrease, or if something precipitously dropped off a cliff! For example, there’s a big difference between “sessions are down -50%” because it was Thanksgiving — versus sessions plummeting due to a major issue.

You also only know if your alert threshold was met, versus hugely exceeded. E.g. The same alert will trigger for “down -50%”, even if the actual value is down -300%. (Unless you’ve set up multiple, scaling alerts. Which… time consuming…!)

So, what have I been doing instead?

As soon as Data Studio added the ability to schedule emails, I created what I call an “Alerts Dashboard.” In my case, it contains a few topic metrics, for each of my clients using GA. (If you are client-side, it could, of course, be just those top metrics for your own site.) You’ll want to include, of course, all of your Key Performance Indicators. But if there are other metrics in particular that are prone to breaking on your site, you’d want to include those as well.

Why does this work? Well, because human beings are actually pretty good pattern detectors. As long as we’ve got the right metrics in there, a quick glance at a trended chart (and a little business knowledge) can normally tell us whether we should be panicking, or whether it was “just Thanksgiving.”

Now to be clear: It’s not really an alerts dashboard. It’s not triggering based on certain criteria. It’s just sending to me every day, regardless of what it says.

But, because it is 1) Visual and 2) Shows up in my email, I find I actually do look at it every day (unlike old school GA alerts.)

On top of that, I can also send it to other people and have them see the same visuals I’m seeing, and they can also click through to the report itself.

So what are you waiting for? Set yours up now. 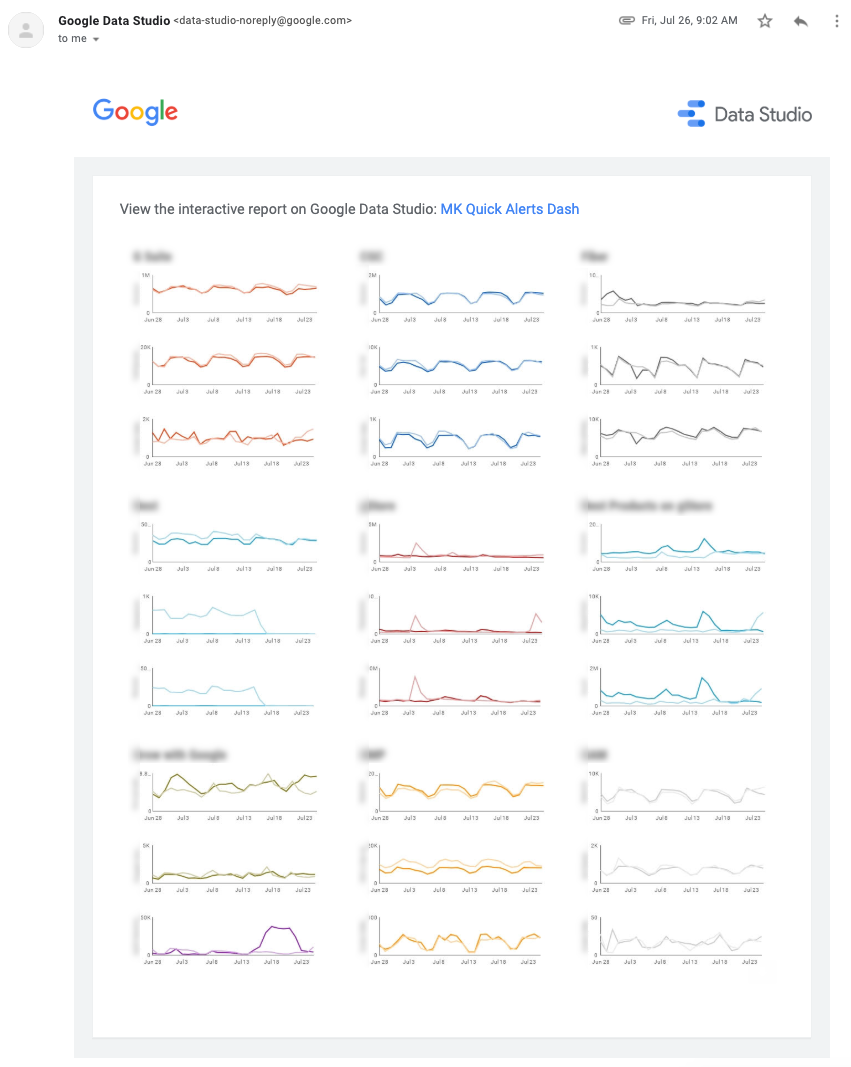