What I Love: Adobe and Google Analytics*

While in Atlanta last week for ACCELERATE, I got into the age-old discussion of “Adobe Analytics vs. Google Analytics.” I’m up to my elbows in both of them, and they’re both gunning for each other, so this list is a lot shorter than it would have been a couple of years ago. To wit:

Are these features identical in both platforms? Of course not! Does one platform handle any of these capabilities in an empirically better way? Perhaps…but the comment trolls and platform homers will take over the comments if we let ourselves stray down such a path. Let’s just say that they both provide these capabilities and accept that personal preference and “the-tool-I-learned-first” quickly enter the picture and make such a debate subjective. Let’s call it close enough to binary parity and move on.

Other historical knocks against one platform or the other are rapidly going away, too: 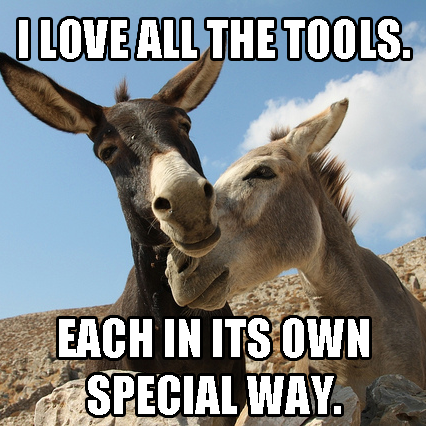 Nonetheless, I made a bold claim last week that I could write a brief post that hits my highlights — geared towards analysts, and avoiding topics that are more religio-philosophical than fact-based — as to the capabilities of each tool that, to me, are meaningful differentiators between the platforms. And, this is my attempt to back that claim up, listing these capabilities as positives of what each tool has that stands out, rather than as them’s-fightin’-words-type criticisms of either platform.

(As it turns out, I was wrong when I claimed I could write a brief post. I circulated the initial draft internally among the Demystified partners and Team Demystified…and the end result is a much more complete — not as…er…”brief” — and clear work.)

Things I Love That Google Analytics Does

Here’s my list of some features I use all the time in Google Analytics that might be lacking in another platform:

Things I Love That Adobe Analytics Does

Here’s my short list of some features I use all the time in Adobe Analytics that might be lacking in another platform:

The Thing I Would Love but Am Unable To

I’ve got to put one item on the list that doesn’t exist in any web analytics platform: better data visualization. Choosing from a 2×2 or 2×3 grid (or even from a longer list of limited layouts) and then dropping in widgets where I can control substantially less of the presentation of the data than I could manage with Excel 95 is embarrassing. Especially since there are oodles of third-party visualization platforms that are built to be embedded in products. I don’t get it. I’m forced to pull data into third-party tools (for me, that’s generally Excel, but plenty of people use Tableau for the same reason — and good on ya’, Adobe, for supporting that with the Tableau export format!) if I want to deliver recurring reports to business users that can actually be meaningfully understood. I need better control of:

I’ve bought a copy of Stephen Fews’s Information Dashboard Design for a web analytics product manager before, and I’ll happily do it again. Let me know if that’s your role and you’re interested.

So, Clearly, the Better Tool Is…

…really? Surely, you didn’t think I was going to bite on that, did you? I’ll even stop short of, “It depends on your needs.” I’d hazard that, north of 75% of the time, a company could flip a coin between these two platforms and then invest all the time they were planning to put into an exhaustive RFP process, instead, into finding people who really know the platform inside and out to implement, maintain, and use the tool. And, they’d come out ahead of the company that obsesses about which of these platforms is “right” for them (they’re both right, and they’re both wrong!).

As Adam Greco says in his Top Gun training classes, “It doesn’t matter what tool you’re using if you’re only using 20-30% of its capabilities. Make sure you have the people and the commitment to not only learn and apply the full power of the tool now, but to stay current on new capabilities as competing platforms chase each other.” Competition is stressful for the vendors…but it’s a boon for analysts!

* This post doesn’t attempt to cover all web analytics platforms. There is no mention…except in this footnote… of Webtrends, IBM Coremetrics, Mixpanel, AT Internet, KISSmetrics, Piwik, or any of the other potential dozens of vendors who may comment here about their particular platforms. I’m sticking with what I know and what we see with our current client base. It’s in the post title.