Most of my consulting work involves helping organizations fix and clean-up their Adobe Analytics implementations. Often times, I find that organizations have multiple Adobe Analytics report suites and that they are not setup consistently. As I wrote about in this post, having different variables in different variable slots across different report suites can result in many issues. To see whether you have this problem, you can select multiple report suites in the administration console and then review your variables. Here is an example looking at the Success Events:

Conversely, if you do have the same variable definitions across your Adobe Analytics report suites, you get the following benefits:

To read more about why you should have consistent report suites, click here, but needless to say, it is normally a best practice to have the same variable definitions across most or all of your report suites.

How Do I Re-Align?

So, what happens if you have already messed up and your report suites are not synchronized (like the one shown above)? Unfortunately, there is no magic fix for this. To rectify the situation, you will need to move variables in some of your report suites to align them if you want to get the benefits outlined above. The level of difficulty in doing this is directly correlated to the disparity of your report suites. Normally, I find that there are a bunch of report suites that are set up consistently and then a few outliers or that the desktop website implementation is different from the mobile app implementation. Regardless of the cause of the differences, I recommend that you make the report suite(s) that are most prevalent the new “master” suite and then force the others to move their data to the variable slots found in the new “master.”

Of course, the next logical question I get is always: “What about all of my historical data?” If you move data from variable slot 1 to slot 5, for example, Adobe Analytics cannot easily move all of your historical data. You won’t lose the old data, it just is not easy to transfer historical data to the new variable slot. Old data will be in the old variable slot and new data will be in the new variable slot. This can be annoying for about a year until you have new year over year data in the new variable slot. In general, even though this is annoying for a year, I still advocate making this type of change, since it is much better for the long term when it comes to your Adobe Analytics implementation. It is a matter of short-term pain, for long-term gain and in some way is a penitence for not implementing Adobe Analytics the correct way in the beginning. However, there are ways that you can mitigate the short-term pain associated with making variable slot changes. In the next section, I will share two different ways to mitigate this until you once again have year over year data.

This first method of getting year over year data from two different variable slots is to use Adobe ReportBuilder. ReportBuilder is Adobe’s Microsoft Excel plug-in that allows you to import Adobe Analytics data into Excel data blocks. In this case, you can create two date-based data blocks in Excel and place them right next to each other. The first data block will be the metric (Success Event) or dimension (eVar/sProp) from the old variable slot and it will use the old dates in which data was found in that variable. The second data block will be the new variable slot and will start with the date that data was moved to the new variable slot. For example, let’s imagine that you had a report suite that had “Internal Searches” in Success Event 2, but in order to conform to the new standard, you needed to move “Internal Searches” to Success Event 10 as of June 1st. In this case, you would build a data block in Excel that had all data from Success Event 2 prior to June 1st and then, next to it, another data block that had all data from Success Event 10 starting June 1st. Once you refresh both data blocks, you will have one combined table of data, both of which contain “Internal Searches” over time. Then you can build a graph to see the trend and even show year over year data.

This Excel solution, still takes some work, since you’d have to repeat this for any variables that move locations, but it is one way to see historical data over time and mask for end-users the fact that a change has occurred. Once you have a year’s worth of “Internal Search” data in Success Event 10, you can likely abandon the Excel solution and go back to reporting on “Internal Searches” using the new variable slot (Success Event 10 in this case), which will now show year over year data.

The downside of the preceding Excel approach is that seeing year over year data requires your end-users to [temporarily for one year] abandon the standard web-based Adobe Analytics interface in order to see trended data. This can be a real disadvantage since most users are already trained on how to use the normal Adobe Analytics interface, including Analysis Workspace. Therefore, the other approach to combining data when variables have to be moved is to use a derived calculated metric. Now that you can apply segments, including dates, to calculated metrics in Adobe Analytics, you can create a combined metric that uses data from two different variables for two different date ranges. This allows you to join the old and new data into one metric that has a historical trend of the data and the same concept can apply to dimensions like eVars and sProps.

Let’s illustrate this with an example. Imagine that you have a metric called “Blog Post Views” that has historically been captured in Success Event 3. In order to conform to a new implementation standard, you need to move this data to Success Event 5 as of April 5th, 2017. You ultimately want to have a metric that shows all Blog Post Views over time, even though behind the scenes the data will be shifting from one variable to another on April 5th. To to this, you would start by creating two new Date Ranges in Adobe Analytics – one for the pre-April 5th time period and one for the post-April 5th period. While you could make a different set of date ranges for each variable slot being moved, the odds are that you will be making multiple changes with each release, so I would suggest making more generic date ranges that can be used for any variables changing in a release like these: 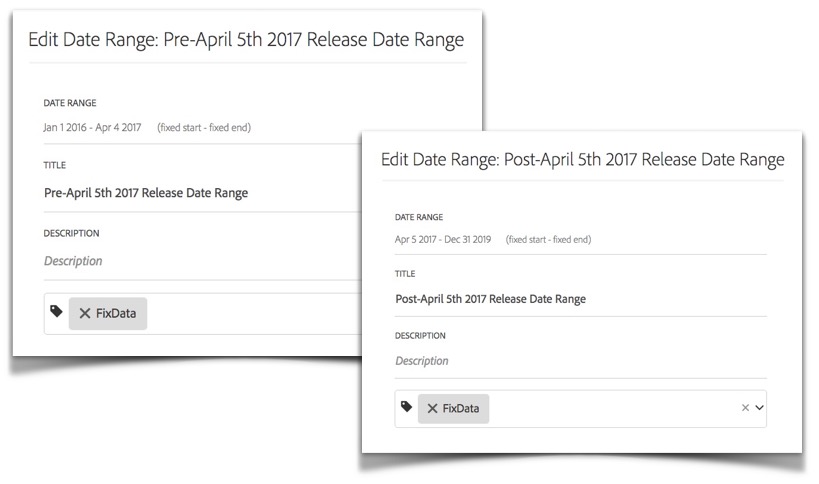 In this case, let’s assume that your historical data started January 1st, 2016, and that you won’t need the combined calculated metric past December 31st, 2019, but you can put whatever dates you’d like. The important part is that one ends on April 4th and the next one begins on April 5th. Once these date ranges have been created, you can create two new segments that leverage them. Below, you can see two basic segments that include hits for each date range: 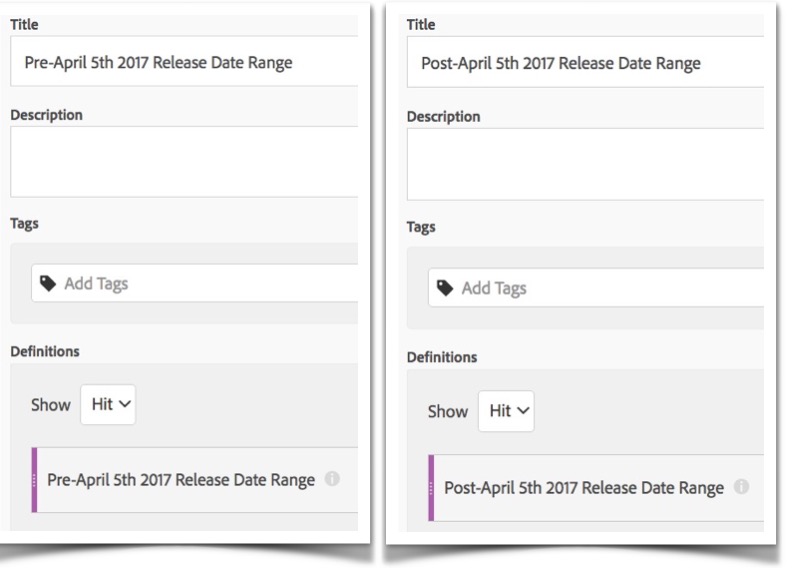 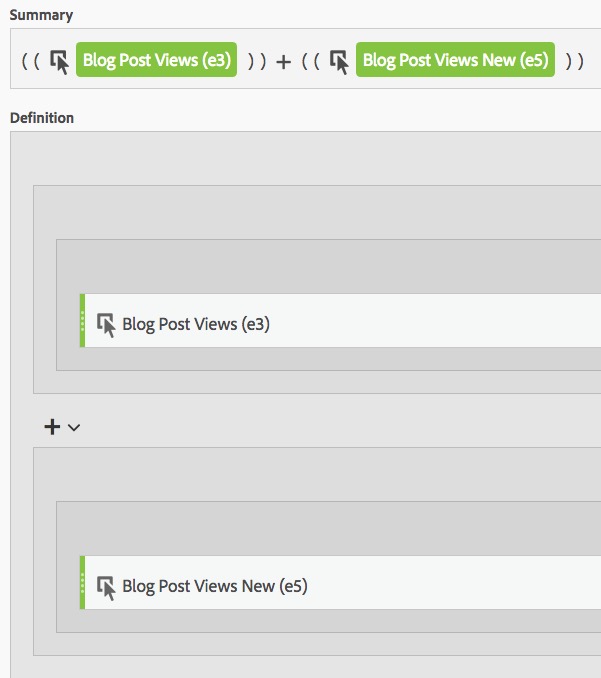 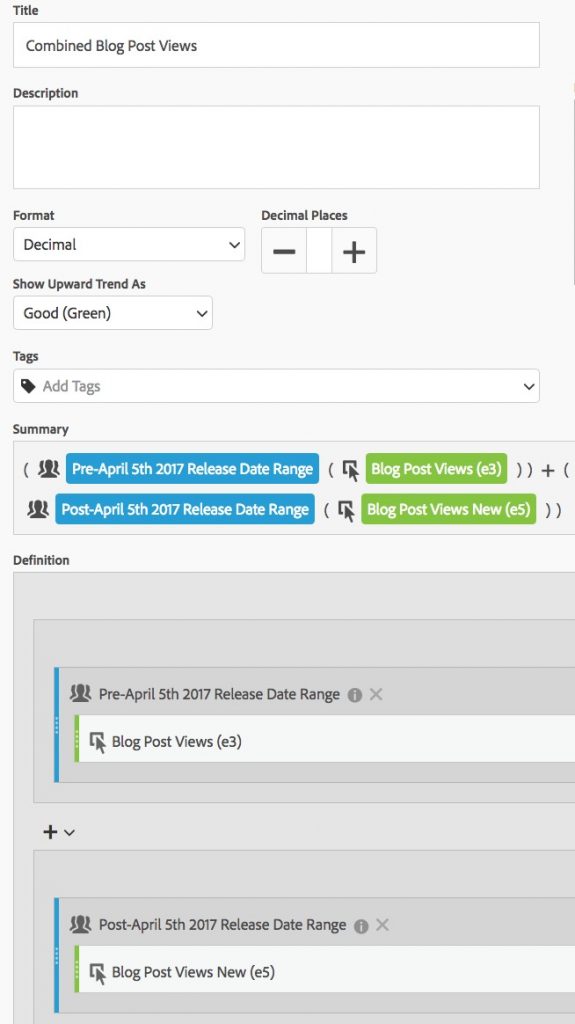 By doing this, you are telling Adobe Analytics that you want Success Event 3 data prior to April 5th to be added to Success Event 5 data after April 5th. Therefore, if your tagging goes as planned, you should be able to see a unified historical view of Blog Post Views from January 1st, 2016 until December 31st, 2019 using this new combined calculated metric. Here is what it would look like (with post-conversion data showing in the red highlight box):

This report is being run on April 8th, shortly after the April 5th conversion and you can see that the data is flowing seamlessly with the historical data.

For you Analysis Workspace junkies, you can see the same data there either by using the new calculated metric or applying the same segments as shown here: 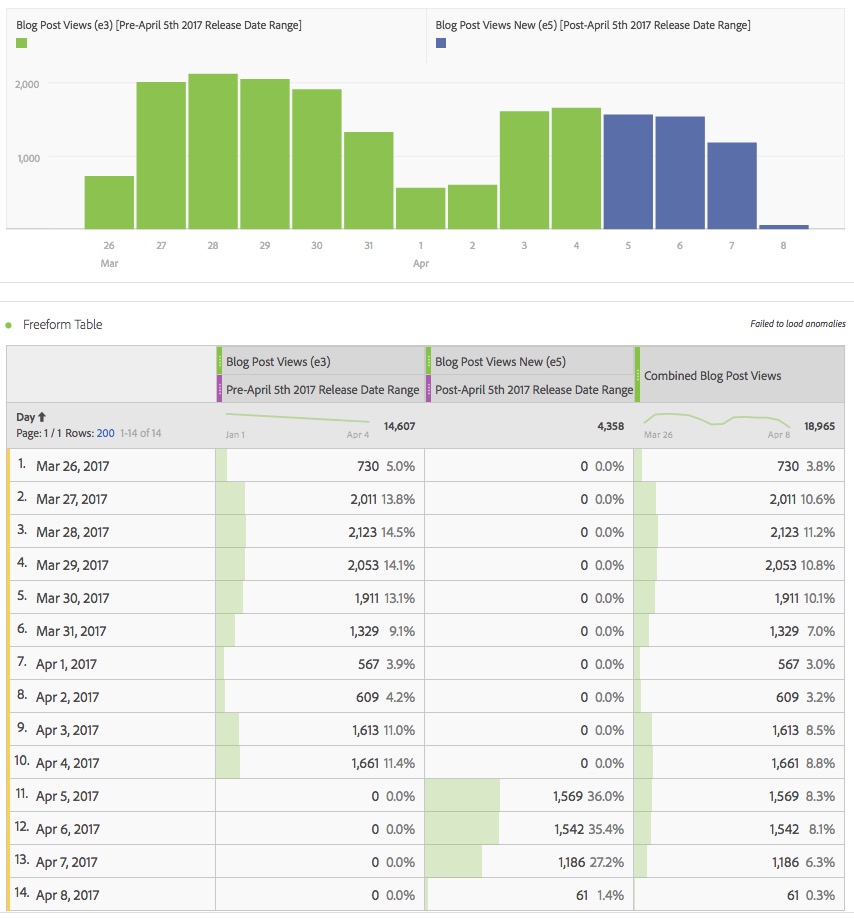 Of course, this still requires some end-user education, since looking at Success Event 3 or Success Event 5 in isolation can cause issues during the transition period. But in reality, most people only look at the last few weeks of data, so the new variable (Success Event 5 in this case) should be fine for most people after a few weeks and the combined metric is only necessary when you need to look at historical or year over year data. In extreme cases, you can hide the raw variable reports (Event 3 & Event 5) and use the Custom Report feature to replace them with this new combined calculated metric in the reporting menu structure (though that won’t help you in Analysis Workspace).

To summarize, if your organization isn’t consistent in the way it implements, you may lose out on many of the advantages inherent to Adobe Analytics. If you decide that you want to clean house and make your implementations more consistent, you may have to shift data from one variable to another. Doing this can cause some short-term reporting issues, since it is difficult to see historical data spanning across two different variables. However, this can be mitigated by using Adobe Report Builder or a derived calculated metric as shown in this post. Both of these are not perfect, but they can help get your organization over the hump until you have enough historical data that you can disregard the old data prior to your variable conversion.