Most websites have specific conversion goals they are attempting to achieve. If you manage a retail site, it may be orders and revenue. Conversely, if you don’t sell products, you might use visitor engagement as your primary KPI. Regardless of the purpose of your website (or app), having a good experience and having people like you and your brand is always important. It is normally a good thing when people use your site/product/app and recommend it to others. One method to capture how often people interacting with your site/brand/app have a good experience is to use Net Promoter Score (NPS). I assume that if you are a digital marketer and reading this, you are already familiar with NPS, but in this post, I wanted to share some ways that you can incorporate NPS scoring into Adobe Analytics.

The easiest way to add NPS to your site or app is to simply add a survey tool that will pop-up a survey to your users and ask them to provide an NPS. My favorite tool for doing this is Hotjar, but there are several tools that can do this. 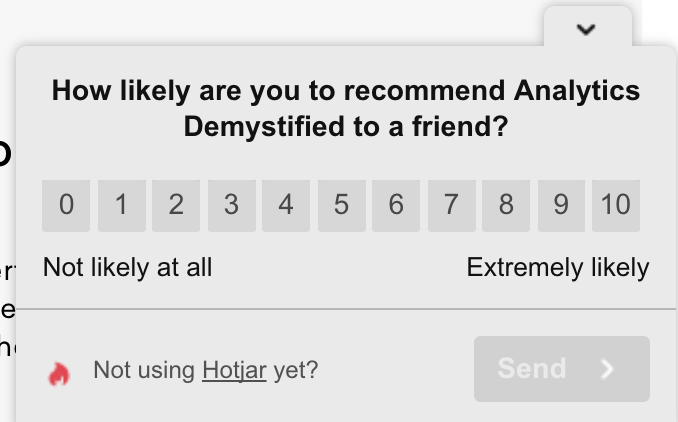 Once your users have filled out the NPS survey, you can monitor the results in Hotjar or whichever tool you used to conduct the survey.

But, if you also want to integrate this into Adobe Analytics, there is an additional step that you can take. When a visitor is shown the NPS survey, you can to capture the NPS data in Adobe Analytics as well. To start, you would pass the survey identifier to an Adobe Analytics variable (i.e. eVar). This can be done manually or using a tag management system. In this case, let’s assume that you have had two NPS submissions with scores of 7 and 4. Here is what the NPS Survey ID eVar report might look like:

At the same time, you can capture any verbatim responses that users submit with the survey (if you allow them to do this): 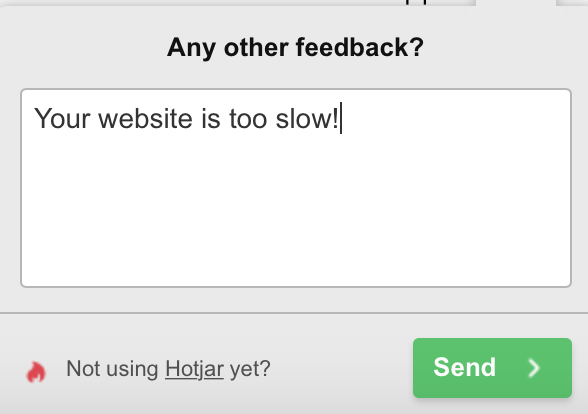 This can be done by capturing the text response in another Adobe Analytics variable (i.e. eVar), which allows you to see all NPS comments in Adobe Analytics and, if you want, filter them by specific search keywords (or, if you are low on eVars, you could upload these comments as a SAINT Classification of the NPS Survey ID). Here is what the NPS Comments eVar report might look like when filtered for the phrase “slow:”

Keep in mind that you can also build segments based upon these verbatim comments, which is really cool!

While capturing NPS Survey ID’s and comments is interesting, you probably want to see the actual NPS scores in Adobe Analytics as well. You can do this by capturing the actual NPS value in a numeric success event in Adobe Analytics when visitors submit the NPS survey. You can also set a counter success event for every NPS survey submission, which allows you to create a calculated metric that shows a trend of your overall NPS.

First, you would setup the success events in the Adobe Analytics administration console:

Let’s look at this using the previously described example. When the first visitor comes to your site and completes an NPS survey with a score of 7, you would set the following upon submission:

When the second visitor completes an NPS survey with a score of 4, you would set the following:

Next, you can build a calculated metric that computes the your overall NPS. Here is the standard formula for computing NPS using a scale of 1-10:

To create the NPS metric in Adobe Analytics, you first need to create segments to isolate the number of Promotors and Detractors you have in your NPS surveys. This can be done by building a segment for Promoters… 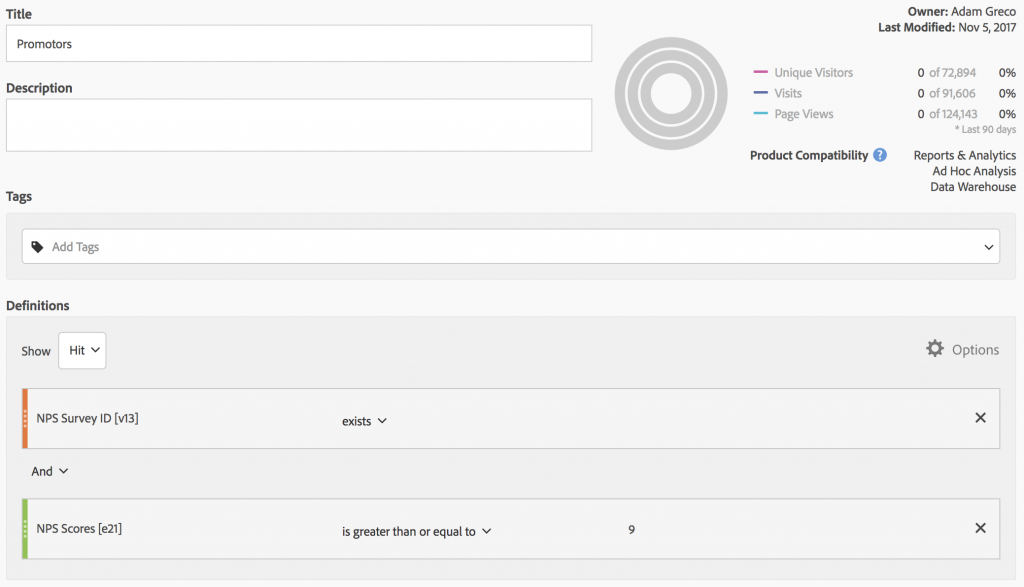 …and a segment for Detractors: 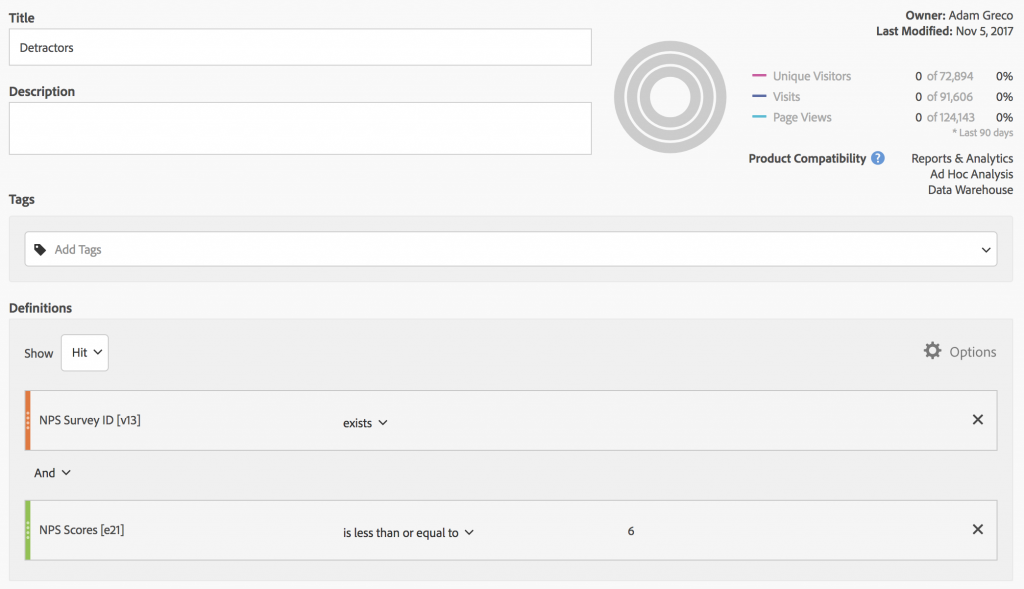 Once these segments have been created, they can be applied to the following calculated metric formula in Adobe Analytics: 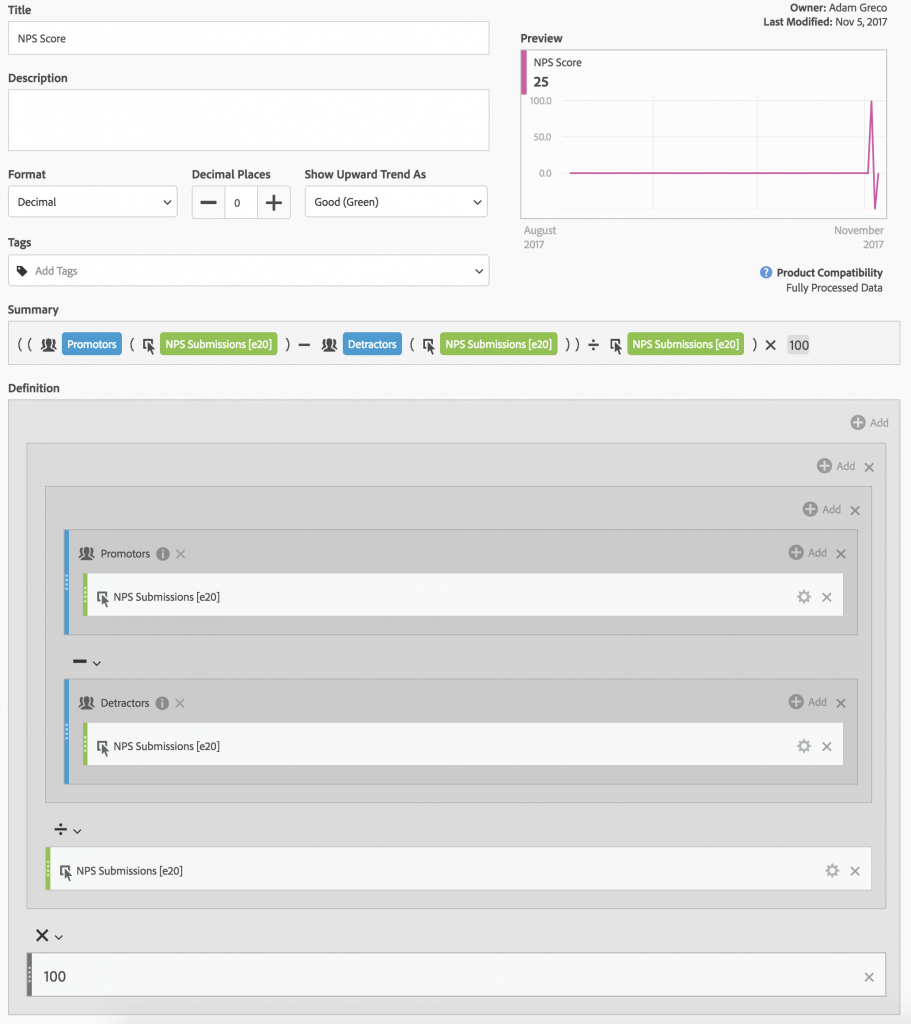 Once you have created this calculated metric, you would see a trend report that looks like this (assuming only the two visitors mentioned above): 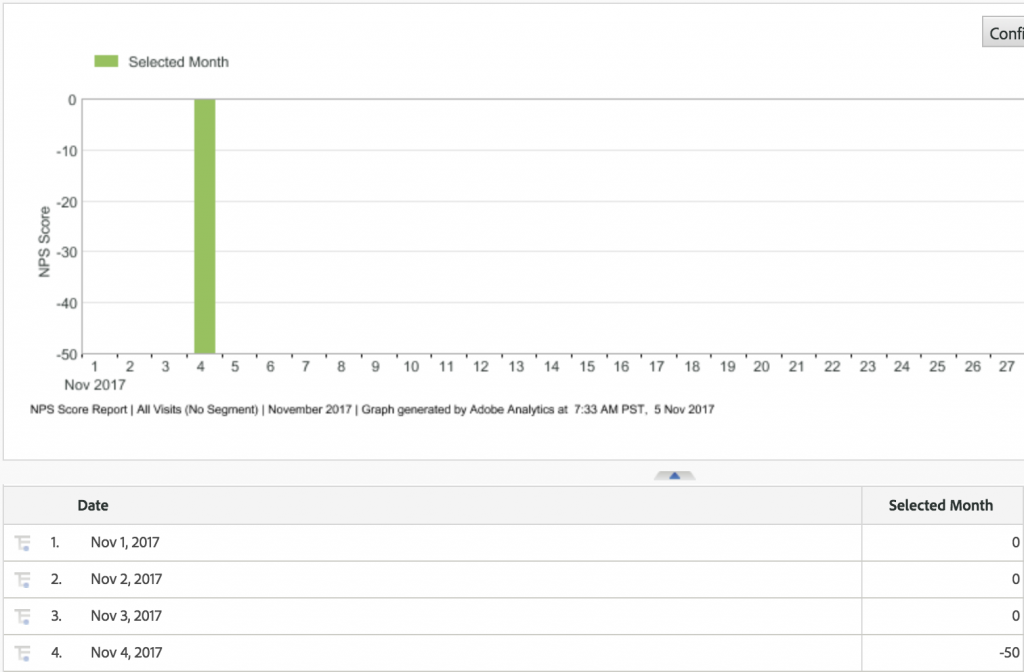 This report only shows the two scores from one day, so if we pretend that the previous day, two visitors had completed NPS surveys and provided scores of 9 & 10 respectively (a score of 100), the daily trend would look like this: 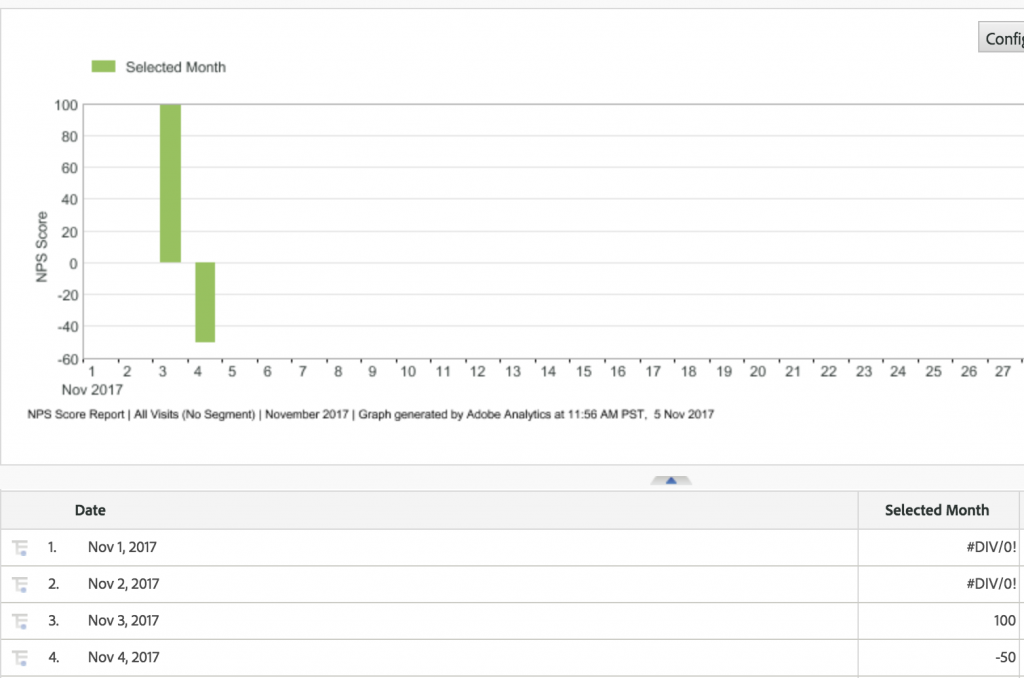 If we looked at the previous report with just two days (November 3rd & 4th) for a longer duration (i.e. week, month, year), we would see the aggregate NPS Score: 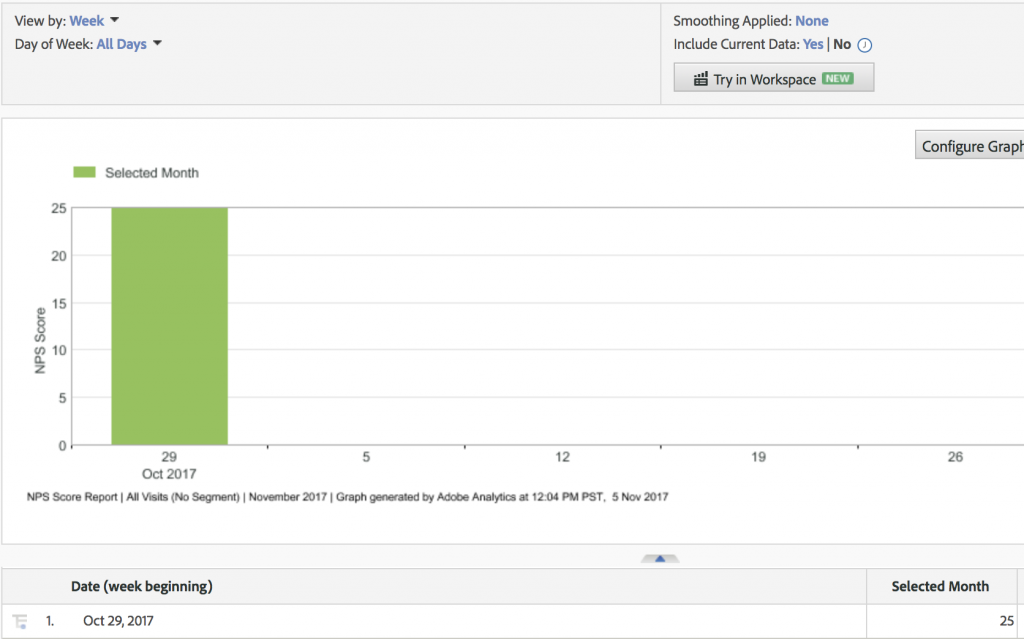 If we had data for a longer period of time (i.e. October), the trend might look like this (shown in Analysis Workspace): 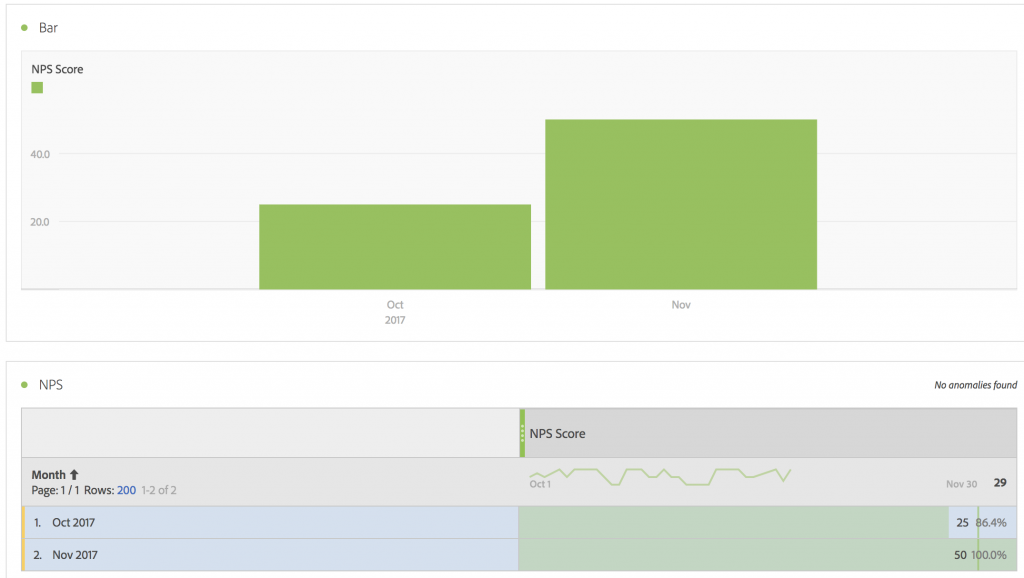 And if we looked at the October data set by week, we would see the aggregate NPS (shown in Analysis Workspace): 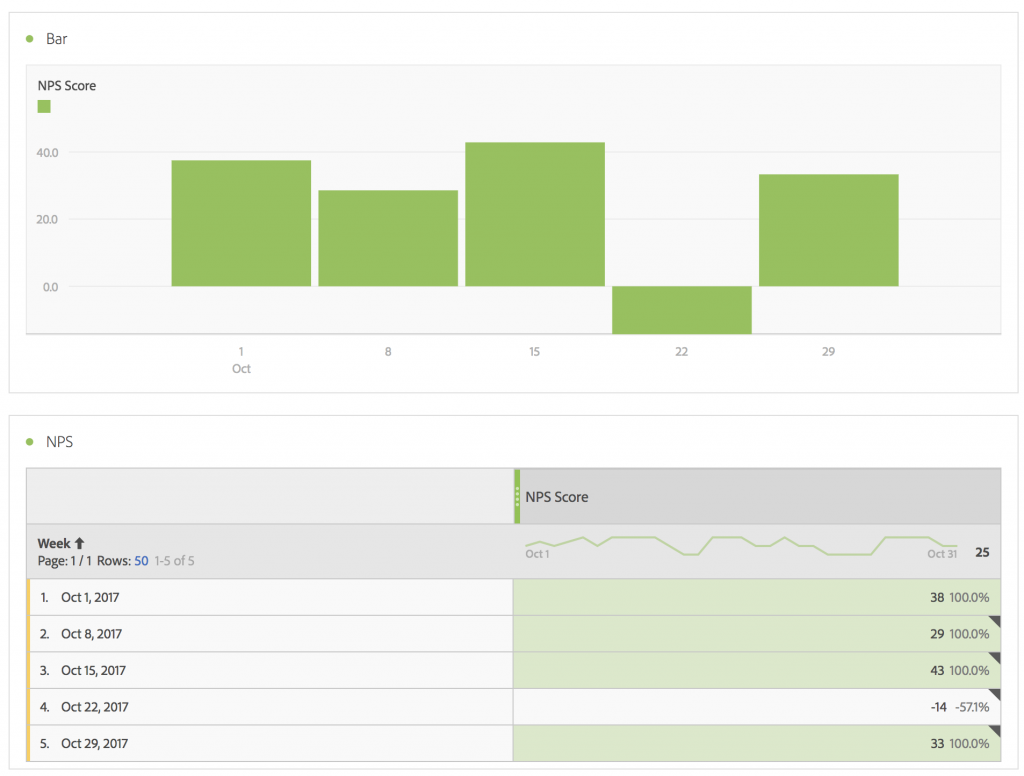 Here we can see that there is a noticeable dip in NPS around the week of October 22nd. If you break this down by the NPS Comments eVar to see if there may be comments telling us why the scores dipped: 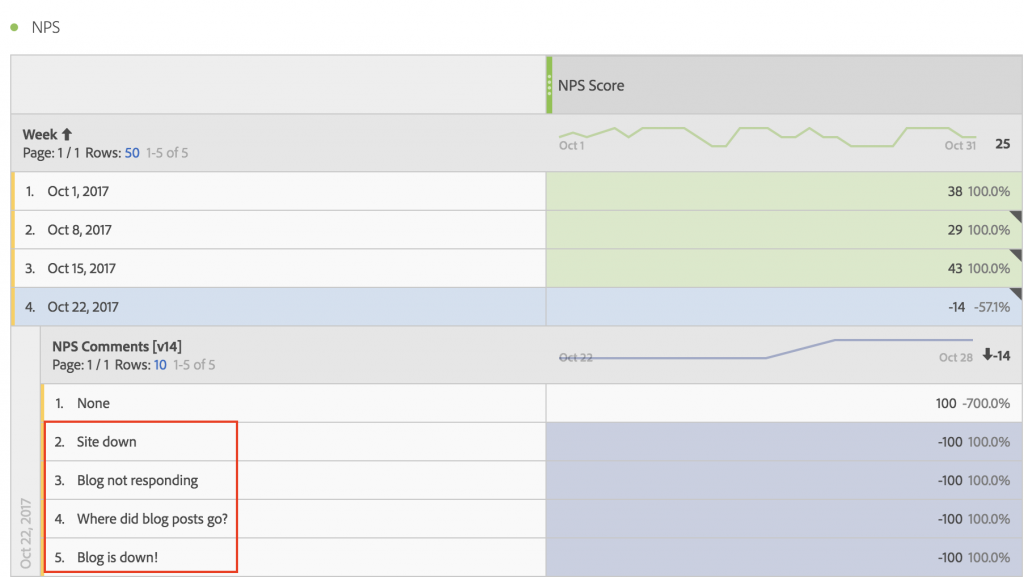 In this case, the comments let us know that the blog portion of the website was having issues, which hurt our overall NPS. 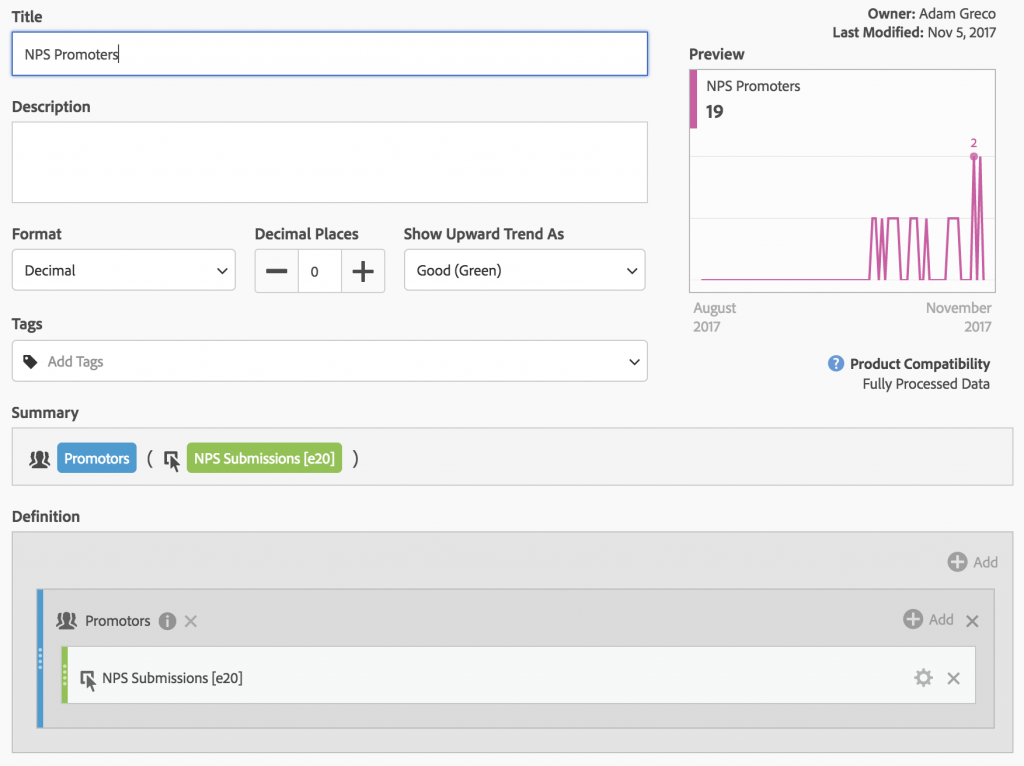 …which would allow me to see a trend of Promoters (or Detractors) over time: 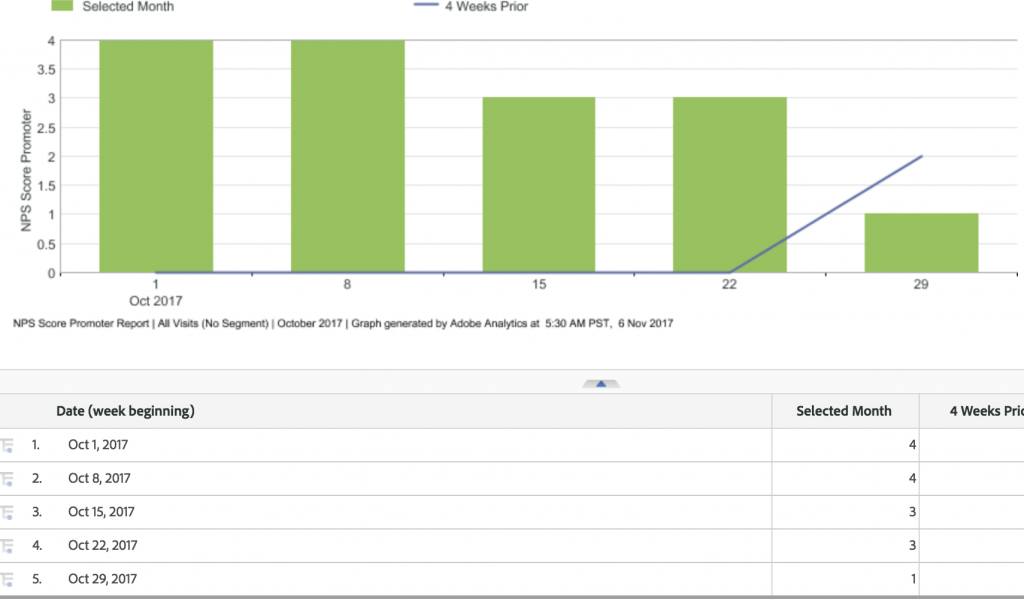 Alternatively, you could also choose to set success events for Promoter Submissions and Detractor Submissions (in real-time) instead of using a segment to create these metrics. Doing this would require using three success events instead of two, but would remove the need for the segments, but the results would be the same.

As you can see, this is a fair amount of work. So why would you want to do all of this if you already have NPS data in your survey tool (i.e. Hotjar)? For me, having NPS data in Adobe Analytics provides the following potential additional benefits:

These are just some ideas that I have thought about for incorporating NPS into your Adobe Analytics implementation. If you have any other ideas, feel free to leave a comment here.