Monish Datta: "It was the best WAW yet!"*

Another month, another Web Analytics Wednesday (WAW) in Columbus. We had two sponsors — both the Web Analytics Wednesday Global Sponsors and Lightbulb Interactive, which was nifty. And, we headed back to O’Shaughnessy’s Public House because, by golly, we just knew if we gave them enough chances they could get up to batting .500 when it came to screwing up our reservations. They succeeded by having no record of our event in “the book.” We made do nonetheless.

The turnout was slightly below normal — we wound up with eleven people all told — but we tried a new format for the discussion that worked out well! Although the group was small, it was a good mix of people: web analysts from major financial institutions, web designers, SEM and web analytics types in online retail, a horse racing marketer, and a slightly-crazy-but-always-entertaining developer from an interactive agency: 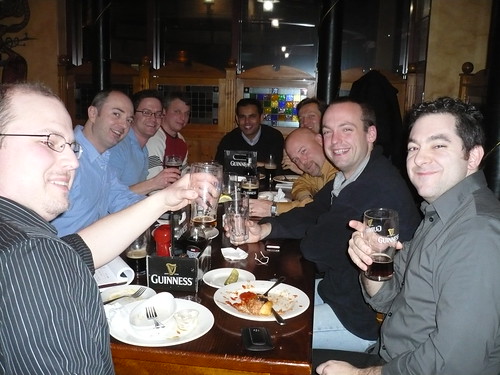 My favorite from the “worst” discussion, though, was this: “Any report provided without context.” That one from the aforementioned slightly-crazy-but-always-entertaining developer.

These reports got a bit more philosophical, but it was a good list nonetheless, with some common themes:

Other discussions/topics/mentions of note from my end of the table:

I almost passed my notepad around asking people to put their Twitter usernames on it…but I decided against it. Feel free to add yours as a comment here whether you were in attendance or not if you’re interested in Columbus Web Analytics Wednesday. And/or, you can join our Facebook group. I was struck by the difference 10 months makes. We talked about Twitter during the first couple of WAWs last year, and the number of users were in the distinct minority. Some people had not even heard of it. Everyone I talked to last night uses Twitter, and uses it enthusiastically. The times they are a’ changin’!

* While quotation marks would ordinarily indicate that this was a direct quote, those in the title of this post more indicate paraphrasing of Monish Datta’s take on the evening. Actually…”paraphrasing” is an overstatement. In other words, I totally made the quote up. But, Monish was smiling and laughing, so I don’t feel too bad about it. I really just needed to get his name in the title for SEO chuckles.