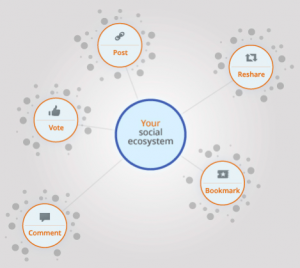 Google’s Eric Schmidt appeared today at LeWeb 2011 and dropped some notable quotes during his interview with conference organizer Loic Le Meur (@loic), including this prescient perspective: “It’s reasonable to say that in the future, the majority of cars will be driverless or driving-assisted.” Foreshadowing perhaps? Could be…but closer to reality:

Google’s Executive Chairman also quipped, “It’s easier to start a revolution and more difficult to finish it.” Google should know. They’ve been revolutionizing the way in which consumers interact on the Web since their inception and news posted today following the LeWeb chat follows suit.

The news reveals a new initiative launching today called the Social Data Hub. What’s even more exciting is the Google Analytics Social Analytics reporting to appear sometime next year. While the details were somewhat vague, I got the inside scoop and what was published should be enough to incite a minor frenzy in the Social Analytics circles.

The “Social Data Hub” is a data platform that is based on open standards allowing Google to aggregate public social media posts, comments, tags, and a plethora of other activities using ActivityStream protocol and Pubsubhubbub hooks. (Yea, that’s a real thing…I had to look it up too.) Early partners in the initiative include social platforms such as Digg, Delicious, Reddit, Slashdot, TypePad, Vkontakte, and Gigya among others. Of course Google’s own social platforms, Google+, Blogger, and Google Groups are included as well. Noticeably absent from the list are social media moguls like Facebook, Twitter, and LinkedIn who have yet to buy into the new Googley idea of a Social Data Hub.

If you’re scratching your head wondering how this is different than Google just trying to get more of the world’s data, you’re not alone. At first glance this may seem like yet another big enterprise ploy to get more data (and oh yeah, Don’t be evil). Well, I see this as a huge win for marketers, bloggers, publishers and anyone else trying to discern the impact of social media marketing across the multitude of channels and platforms available today. Currently, most marketers are forced to evaluate their social media activities through the lens that the platform (or their social monitoring tool) offers. Typically this yields low-hanging counting metrics which can be of some value, but more often than not end up as isolated bits of information that don’t provide business value.

Getting at this all important business value in many cases requires wrangling the metrics into another system, processing data and just generally working hard to gain some incremental insight. This is laborious work for the average marketer, so it’s no wonder that eConsultancy just reported that 41% of marketers surveyed had no idea what their return on investment was for social media spending in 2011. Yikes!

Google’s new Social Data Hub – coupled with Google’s Social Analytics reporting – has the potential to knock the socks off these unknowing marketers. By aggregating data from multiple social platforms into the Social Data Hub, they have the ability to make comparisons across platforms to show which channels are driving referrals, which are generating the most interactions, and which are potentially not worth investing in. It’s not that big of a stretch to imagine Google linking this information to data within their Google Analytics product such as Adwords, Goal completion rates and cool new flow visualizations. If/when Google applies the lens of their analytics tool to this new aggregated data set, look out marketers — you just hit the jackpot! Of course, I’m speculating here, but the possibilities are intriguing for a Social Analytics geek like me. That is of course, if platforms open their APIs to the Social Data Hub. A big if…

So Why Would a Platform buy into the Social Data Hub?

Well, it’s questionable if Facebook ever will opt in for this system so I wouldn’t hold your breath on that one. However for other social platforms, being part of the hub has some distinct advantages. They get to prove their value by partnering up with one of the only solutions on the Web that is capable of providing real comparative data on the performance of social channels.

This is a no-brainer for fledgling platforms that want to increase their visibility and even for established players, opting into Google Social Hub could mean the difference in gaining advertising dollars from skeptical marketers. While the big dogs in social media may take a while to come around, I see this new Hub as a potentially great equalizer for understanding the impact of social media as it relates to referrals for on-site activities which can ultimately lead to conversions and bottom line impact.

While today’s announcement may be just a small ripple in the social media pond, I see big waves building for Marketers. But that’s just my take on the disruptive and revolutionary force that is Google…

If you want in on the action, here’s a link to request access to the private beta for Google’s Social Analytics Reporting: https://services.google.com/fb/forms/socialpilot/

And here’s one to for platforms to join the Social Data Hub: http://code.google.com/apis/analytics/docs/socialData/socialOverview.html