Last night was the monthly Columbus Web Analytics Wednesday at Barley’s Smokehouse and Brewpub, and we were fortunate to have Webtrends sponsor for the second time this year! This time, we managed to get it scheduled in a way that lined up with Noé Garcia‘s travel plans, so he wore the dual crown of “Traveled Farthest to the Event” (from Portland, OR) and “Sponsor Representative.” The dual crown looked surprisingly like an empty beer glass: 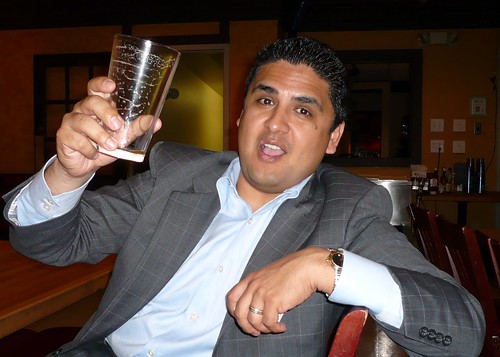 Noe and Bryan Cristina of Nationwide co-facilitated a discussion about going beyond the application of web analytics tools within the confines of the tool itself. The most active discussion on that front was spawned by one of the regular participants in the group who works at a major, Columbus-based online retailer. Not necessarily this guy, but maybe it was him. My lips are sealed. 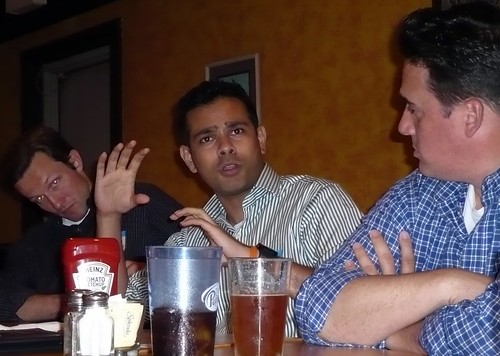 We talked about how web analytics data, tied to order information, and then matched back to offline marketing channels such as printed catalogs, can be very effective at driving marketing efficiency. In the examples that triggered the discussion, as well as from the other participants’ experiences, the consensus was that, while the ideal world would have all of this data hooked together automatically…rolling up your sleeves and tying the data together manually can still yield a substantial payback. Part of the discussion got into volume — for companies that do a lot of direct mail-oriented promotion, using web analytics data to cut the mail volume by even a fraction of a percent (by using that data to better target who does/does not respond to printed mail) can provide significant and quantifiable savings for a company.

I didn’t think I’d ever hear anyone at a WAW say “Zip+4” (that’s shorthand for the 5-digit zip code plus the four additional digits that you see on a lot of your mail)…other than me! But I did! The person who said that may or may not be a different person pictured in the photo above. Again…my lips are sealed!

Dave Culbertson, a WAW promotional channel unto himself, kicked off an entirely different, but equally intriguing discussion: 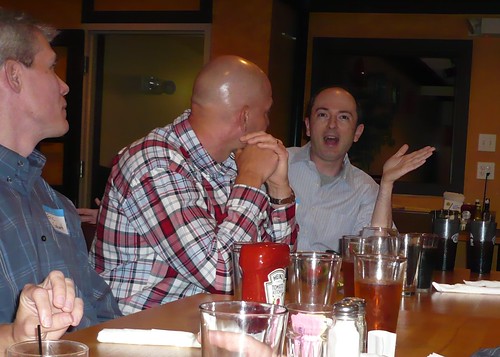 It all started as Dave was driving his Mazda in Grandview a couple of weeks ago. He got quasi-cut off by a 2011 Ford Fiesta two cars ahead of him. That prompted this tweet:

Now, Dave regularly mocks people who promote themselves as being social media gurus/experts/mavens…but he’s one of the most social media savvy marketers I know. He also knows his cars. For one of those reasons (or maybe both) he immediately recognized that the car in front of him was part of Ford’s Fiesta Movement so he nailed a very relevant hashtag with his tweet. As it happened, someone else on Twitter saw the tweet, quickly realized who the likely culprit was, tweeted to her, and she wound up apologizing via Twitter less than an hour after the incident!

Ms. Single Mama is a popular blogger, and this was the first time that she and Dave met in person. Everyone was curious about her Ford Fiesta agent experience. She obliged us by explaining, and, later, a good chunk of us headed out to the parking lot to see the 2011 Ford Fiesta she is driving for six months: 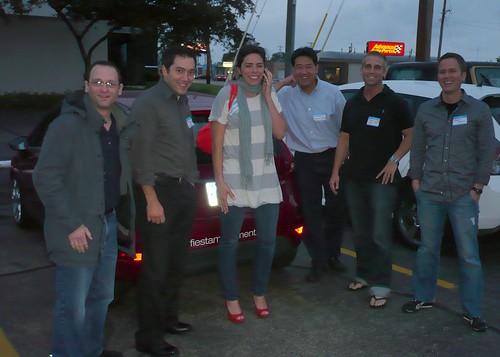 Yes, we had name tags. Yes, the intial group that followed Alaina out to look at her car was entirely male. Yes, all told, about twice as many people as this wound up checking out the car. And, finally, yes, Alaina made a call in the midst of this picture! Andrew (far left) commented that the dashboard looked like the head of a Transformer. He…was right!

Dave even demonstrated his social media hipness by snapping a picture of the vehicle with his iPhone and then tweeting it: 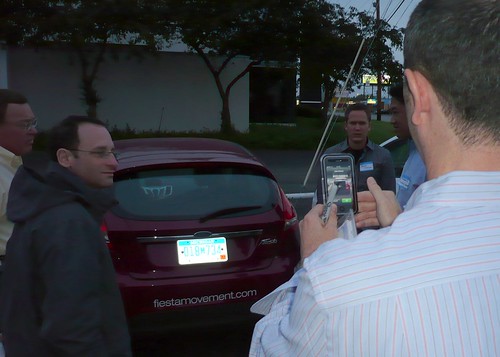 All in all, it was an engaging, informative evening. I’m sure I’ll miss some of the companies that were represented, but they included JPMorgan Chase, Nationwide, Victoria’s Secret Online, Webtrends, Clearsaleing, Bath&Body Works, Cardinal Solutions, Highlights for Children, Rosetta, Foresee Results, Acappella Limited, DK Business Consulting, Lightbulb Interactive…and others! Not. A. Bad. Crowd!

The next WAW will be July 15th. We’re working hard to get our calendar for the rest of the year nailed down, which means we are looking for sponsors and presenters. Please contact me at tim at <this domain> if you are interested on either front.