I’ve officially succumbed to the Blog an Intriguing Title Syndrome (BITS). My payback for that, I suppose, is that I’ve blown the SEO power of my <h2> tags, my <title> tag, and keywords in the URL such that almost certainly no one who would actually be interested in this post will find it via Google or Bing. So it goes.

But, the title isn’t a pure gimmick. It’s the outgrowth of one of those, “I bet I’m the only person sitting in this church hall with 50+ other people at 3:30 AM who is having this thought,” moments. We all have those moments occasionally, right? Right?!

Gilligan, Are You Drunk? WHAT Are You Talking About?

The basic thought: Marketing is like homelessness, in that they face similar challenges when it comes to measurement.

Earlier this week, I participated in an annual homelessness count in downtown Columbus coordinated by the Community Shelter Board (CSB), which is an organization that drives coordination, collaboration, and consistency across the various homeless shelters in the area. It’s been nationally recognized as a model for how communities can efficiently and effectively meet the basic needs of the homeless. As it turns out, they’re also an organization that does a great job of measurement (which, I now realize, I’ve discussed before).

One of the questions that CSB tries to answer for the community is, “Are we reducing the number of people who are homeless over time?” It turns out that that is a pretty tough question to answer. CSB can certainly track how many beds are filled each night in the various shelters they work with, but those shelters tend to pretty much run at capacity and find creative ways to adjust their capacity as needed so they seldom turn people away. And, the weather affects how many people seek shelter on any given night. So, it’s messy to measure the true change in overall homelessness. That’s sort of like measuring marketing.

Whopper of a Disclaimer: I’m going to spend the rest of this post comparing measuring homelessness to measuring marketing. I’m pretty passionate about both, but the latter pays the bills, while the former actually has a degree of Noble Purpose attached to it. I am in no way comparing the the marketing profession to the group of underpaid and overworked people whose careers are dedicated to reducing homelessness. There is simply no contest there.

The way that we measure marketing at the highest level is often by measuring revenue, profitability, brand awareness, brand affinity, etc. These are all messy to measure in one way or another, and some of them are expensive to measure, too! It turns out, measuring homelessness is the same way.

So, there I was at 3:15 AM in a church hall waiting for all of the volunteers to arrive. Each team in the hall was made up of 5-6 people, and each team was assigned a different area of the city to physically walk around counting the homeless in that area. It’s not that it takes 5-6 people to do the counting, but there is safety in numbers. I was pretty much just one of “the numbers.” My team’s leader was Dave S., who I’ve known for several years, and whose team I explicitly asked to be assigned to. I mean, if your pre-count pep talk includes flashlight under the chin, how can you not be inspired? 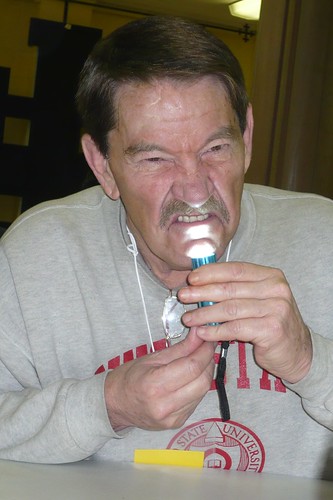 The Outcome Alone Isn’t All That Helpful

So, we headed out and did our counting. For our group, our total homeless count was: zero. Does that mean that we’re solving homelessness in Columbus? Of course not. That might be the case (we certainly hope it is), but we were only providing one input to an overall count that included the other teams, a shelter census, and self-reported “homeless-but-not-somewhere-you-could-count-me” (i.e., a car) data. And, there was a lot of construction under way in our area, which doesn’t make for conducive overnight outdoor stays, so we were not all that surprised with what we found (two of the members of our team had covered the same area last year, and they did count a handful of people).

Marketing Analog: It’s messy to measure overall marketing outcomes, and it’s almost always impossible to draw a meaningful conclusion from a single data set. In the world of digital and social media, we don’t want to go crazy and try to assess an unorganized and overwhelming sea of data, but we do want to deliberately plan and measure using different tools and sources as appropriate to get as clear a picture as possible of a messy world.

Regardless of how the final tally turns out on the homeless count, having a solid annual measure of the key outcome we’re hoping to change is just the frame around a rather intricate and involved picture. Homelessness, like marketing results, are impacted by myriad  underlying factors. The most commonly recognized causes of homelessness are:

It’s a daunting challenge to address all of these, and it’s even more daunting to try to disentangle which of these issues are interrelated and to what degree — both for an individual and at a macro level.

Marketing Analog: Trying to tease apart how economic factors, cultural trends, competitor activity, TV advertising, print advertising, radio advertising, web site content, SEO and SEM, Facebook, and Twitter all interact with each other to affect marketing outcomes is daunting and messy. The fact is, we need to effectively use multiple channels, and we need to identify cross-channel effects and measure those as best as we can. But, it’s not easy, and it’s definitely not perfect.

I’m starting to feel a little silly making this comparison, but, having volunteered on a number of “basic needs” (the lower levels of Maslow’s Hierarchy) committees over the years, it’s been interesting to watch how often the question gets asked: “What’s the single root cause that we can address to have the biggest impact?” The answer? There isn’t one. It’s got to be a multi-faceted approach. And, it’s also a fact that no one person or group can address all of the facets at once.

As it happens, one of the other volunteers on my count team was Matt K., who is the United Way of Central Ohio staff member now responsible for the main United Way committee on which I’ve been a member for the past few years. As we walked along the Scioto River early Tuesday morning, we chatted about how hard it was to identify a clean set of “leading indicators” as to whether we were making progress in our assigned community impact area: emergency food, shelter, and financial assistance. I told Matt that he and I were living in similar worlds — we both are supporting people with expectations and desires for easy, accurate, and accessible measures of something that is very complicated and messy!

One final point: our assigned area was a mile or two away from the church where we started…and no one had a car that would easily fit six people. Luckily, it was relatively warm (mid-30s), and the back of my truck was relative dry, so four of us piled into the front, while Matt K. and  Joe M. (also of United Way) climbed into the back of my truck: 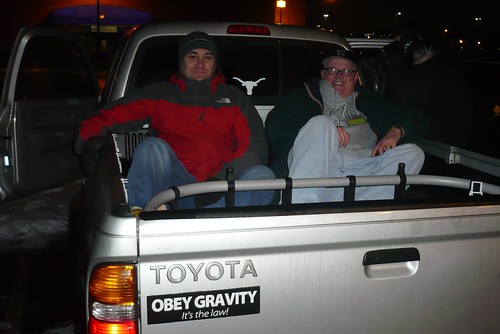 Now, had I known we would need to transport six people ahead of time, I easily could have swapped vehicles with my wife for the day and brought along a minivan rather than a small truck. But, we didn’t coordinate that up front. We didn’t fully plan for our measurement.

Marketing Analog: Planning does matter. It doesn’t mean that, without planning, you can’t gather some data, but you may not get the data you want, and it may be a little more painful (or at least chilly) to get the data you need.

I guess, as an analyst, I see data challenges all around me. I also have lower expectations for the quality and completeness of data, I’m more comfortable with wildly imperfect proxy measures, and I expect gathering meaningful data to be a messy process.

Whether counting the homeless or counting web site conversions, though, it’s definitely a whole lot more pleasant to do it with fun and interesting people. I’ve been pretty fortunate on that front!