Originally written by Analytics Demystified on May 4, 2013

I’m chunking up my reflections on last month’s eMetrics conference in San Francisco into several posts. I had a list of eight possible topics, and this is the fourth and (probably) final one that I’ll actually get to.

I’ve attended the “privacy” session at a number of recent eMetrics, and the San Francisco one represented a big step forward in terms of specificity. “Privacy” seems to be a powerful word in the #measure industry — it’s a single word that seems to magically turn many people and companies into ostriches! It’s not that we want to avoid the topic, but there is so much complexity and uncertainty that putting our heads in the sand and kicking the can down the road (everyone loves a good mixed metaphor, right?) seems to be the default course of action.

When Pop Culture Picks It Up…

I was a West Wing fan, but had no memory of this clip that René shared:

When you’ve got mainstream network television referencing a topic, it’s a topic that is at least on the periphery of the mainstream.

René pointed out that many Americans miss the point when it comes to the European privacy regulations — in typical America-centric fashion, we ignore history. We see privacy as a topic that is up for debate — how do we protect consumers with minimal regulation so that businesses can capitalize on as much personal data as possible.

In Europe…there was the Holocaust. René described how, in The Netherlands prior to WWII, the  government maintained detailed and accurate records on every citizen. When the Nazis invaded, this data made it very easy for them to identify and persecute Jews. Of the 140,000 Jews who lived in The Netherlands prior to 1940, only 30,000 survived the war, and historians point to the availability of this data as one of the main reasons for this. Yikes! For many Europeans, this sort of history is both deeply embedded and strongly linked to the topic of personal and online privacy.

Thinking of privacy as an undisputed as a fundamental right is somewhat eye-opening.

It Doesn’t Matter Where Your Company Is Based

This isn’t exactly news, but it seems to be one of the excuses marketers use for burying their heads in the sand: “We’re based in Ohio — not California or Europe. So, how much do we have to worry about privacy regulations there?”

The answer comes down to where your customers are. The European Directive, as well as California regulations, do not care where a company is based. They’re focused on where the consumers interacting with those companies are. Pull up your visitor geography reports in your web analytics platform and look at where your traffic is coming from — anywhere that has a non-miniscule percentage of traffic is likely somewhere that you need to understand privacy-regulation-wise.

Why California instead of “the U.S.?”

Joanne pointed out that California is clearly in the forefront when it comes to developing, implementing, and enforcing privacy regulations in the U.S. The California Online Protection and Privacy Act (CalOPPA) has been in effect since 2004 (although not widely understood for the first few years). That’s closing in on a decade!

To me, this sounded a lot like fuel economy standards in the auto industry — California is a large enough market that businesses can’t afford to ignore the state’s residents. At the same time, other states, and the federal government (because the U.S. has a long — and checkered — history of using the states as laboratories for testing ideas), are watching California to see what they figure out. There is a very good chance that what works for California will be a basis for other states and for federal regulations.

Is California the Same As Europe?

They’re different…in that the U.S. and Europe are different — both culturally and structurally.

They follow developments in each others’ worlds, but they’re not actively marching towards a single, unified regulation.

So, Where Should Companies Start?

Step 1: Check your privacy policy. Really. Read it. Read it for your country-specific sites (simply translating your U.S. privacy policy into German doesn’t work!). If you give it a really close read, are you even complying with what you say you are?

Step 2: Learn some details. For Europe, reach out to René at the email address in the image below. He’s got a document that explains the ins and outs of EU privacy regulations (if the number “27” doesn’t mean anything to you, you haven’t learned enough): 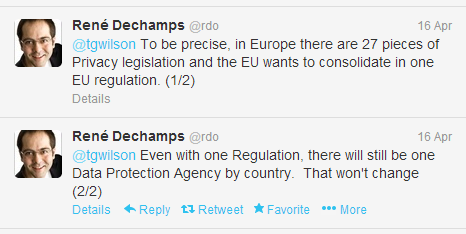 For California, one resource is the California Attorney General’s site for online privacy. Unfortunately, it is a bureaucratically built site, so be ready for some heavy document-wading.

Step 3: Educate your company. This one is no small task, because, when asked who to include in that discussion, it seemed like a simpler answer would have come if the question was who not to include. The web team, marketing, legal, and IT are a good start. The best hook is “We could be fined 1,000,000 euros…”

In Short: It’s Still Messy, but Things Are Getting Clearer

The heading says it all. “We” all need to take our heads out of the sand and get smarter on this. If a regulatory agency comes calling, the worst response is, “Tell me who you are again?” The best (but not currently possible) response is, “We’re totally compliant.” A good response is, “We’re working on it, here’s what we’ve done, and here’s our roadmap to do more.”