Raise your hand if you’re running Adobe Analytics on your site. Okay, now keep your hands up if you also are running Google Analytics. Wow. Not very many hands went down there!

There are lots of reasons that organizations find themselves running multiple web analytics platforms on their sites. Some are good. Many aren’t. Who’s to judge? It is what it is.

But, when two platforms are running on a site, it can be handy to know whether they’re comparably deployed and in general agreement on the basic metrics. (Even knowing they count some of those metrics a bit differently, and the two platforms may even be configured for different timezones, we’d still expect high-level metrics to be not only in the same ballpark, but possibly even in the infield!)

This is a good use case for R (although there are certainly other platforms that can do the same thing). Below is a (static) snapshot of part of the report I built using R and RMarkdown for the task (using RSiteCatalyst and googleAnalyticsR to get the data out of the relevant systems, and even leaning on dartistics.com a bit for reference): 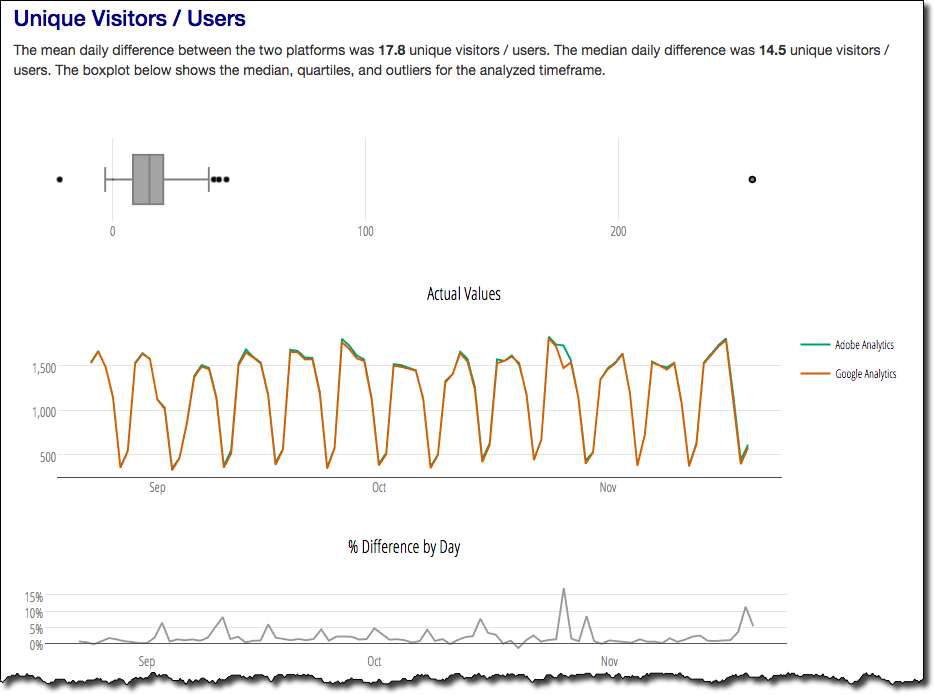 One of the great things about a platform like R is that it’s very easy to make that code shareable:

The code is easily customizable to use different date ranges, as well as to add other metrics (like, say, orders or revenue — but the site this demo report uses isn’t an eCommerce site). It’s currently just a static report, as my initial need for it was a situation where we’ll only occasionally run it (it was actually requested as a one-time deal… but we know how that goes!). I know of at least one organization that checks this data daily, and even the report shown above shows some sort of hiccup on October 26th where the Google Analytics traffic dipped (or, in theory, the Adobe Analytics data spiked, but it looks more like a dip in a simple visual inspection). In that case, the same script could be used, but it would have to be scheduled (likely using a “cron job,”) and there would either need to be an email pushed out or, at the very least, the refresh of a web page. R is definitely extensible for that sort of thing, but I kept the scope more limited for the time being with this one.

What do you think? Does this look handy to you?