What Happens When You Combine Analytics and Pregnancy?

What Happens When You Combine Analytics and Pregnancy? 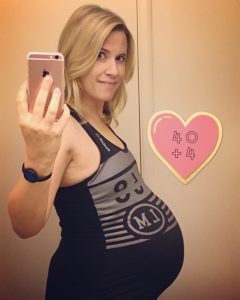 Headed to BodyPump on the day I went in to labor

Those of who know me might have noticed I have been suspiciously quiet. (Let’s be honest, that’s not the norm for me!) I wanted to explain a little about where I’ve been, and how I manage to make everything in my life about analytics.

If it wasn’t obvious from some of my previous posts and presentations, I have an interest in “quantified self” – essentially, tracking and applying analytics to every day life. So, when my partner and I were expecting a baby, of course I had to turn this in to an opportunity to analyze what happens to physical activity levels during pregnancy.

As background: I’m a pretty active person. I teach Les Mills group fitness classes (4-5 classes/week) and work out 6-7 days a week. Because I was so active before pregnancy, I was able to keep doing everything I had been doing, all the way up until the day I went in to labor. However, even with a focus on continued activity, I found there was still a “slow down” that happens in pregnancy.

I tracked my steps and “active time” (which includes any exercise, even if it’s not “steps based” – for example, this would include activities like swimming or yoga, that aren’t easily measured by “steps”) throughout pregnancy, as well as during the postpartum period. This gave me data I could use to examine the changes to activity levels at different stages of pregnancy, and after birth.

Here is what I found…

In case you’re into charts:

How I tracked this

For years now I have used Jawbone UP products to record my step, activity and sleep data. I have IFTTT connected, which automatically sends my UP data to a Google Spreadsheet. That’s the data I used for this analysis.

Why no sleep analysis, you might wonder? Two reasons: 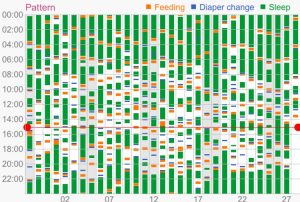 Yes, there is actually such a thing as a Quantified Baby. My partner and I use the Baby Tracker app to record our son’s sleep, feeds, medication etc, which gives us amazing little charts we can use to detect patterns and respond accordingly. For example, choosing an appropriate bed time based on the data of his sleep cycles. There’s probably not a post coming out of that, but yes, the tracking does continue on!

Thanks for tuning in!

I undertook this analysis mainly because I found it interesting (and I’m a nerd, and it’s what I do.) Pregnancy was such a unique experience, I wanted some way to quantify and understand the changes that take place. Most people probably won’t be too interested, but if you have any questions or want to discuss, please don’t hesitate to leave me a note in the comments!