A Guide to Segment Sharing in Adobe Analytics

Update 5/23/2014: This post should now be unnecessary and no longer accurate as of the May 2014 Adobe Analytics release. See this post by Ben Gaines for details on the segmentation feature updates released then.

Update 3/27/2014: Following the Sneaks session at the 2014 Adobe Summit in Salt Lake City, this post is going to have a very short half-life. Segments are getting much more shareable! I’ll get this updated once I’ve got my hands on the update and can speak to it accurately.

In honor of Adobe Summit 2014 coming up next week, I’ve got an Adobe-related tactical post!

Over the past year, I’ve run into situations multiple times where I wanted an Adobe Analytics segment to be available in multiple Adobe Analytics platforms. It turns out…that’s not as easy as it sounds. I actually went multiple rounds with Client Care once trying to get it figured out. And, I’ve found “the answer” on more than one occasion, only to later realize that that answer was a bit misguided.

To be fair, there is actually a tall order for Adobe here: three fairly distinct data reporting/analysis/extraction platforms (Reports & Analytics, Data Warehouse, and Ad Hoc Analysis), and an ideal state where all three can be used for segment creation such that any of the other two can then use that segment! Some analysts are (inexplicably) still clinging to Reports & Analytics (SiteCatalyst) as their primary analysis platform, which is a little silly, given the increased speed and flexibility of Ad Hoc Analysis (Discover). But, I get that the Discover interface has a steeper learning curve, so Reports & Analytics is probably not going anywhere any time soon (although…who knows what will be announced next week? I don’t!).

Anyway, I finally sat down a few weeks ago and created a grid of all the different places a segment could be created, and then where that segment would be available. I ran that past a few people and got some feedback. It’s not going to be a surprise to anyone who is interested in this post that Adam Greco was the biggest contributor of that feedback.

Here are the main highlights (unpleasant ones, unfortunately) from this investigation:

A Google spreadsheet with more detail (the grid shown below) is located at http://bit.ly/segmentSharing or by clicking on the image below: 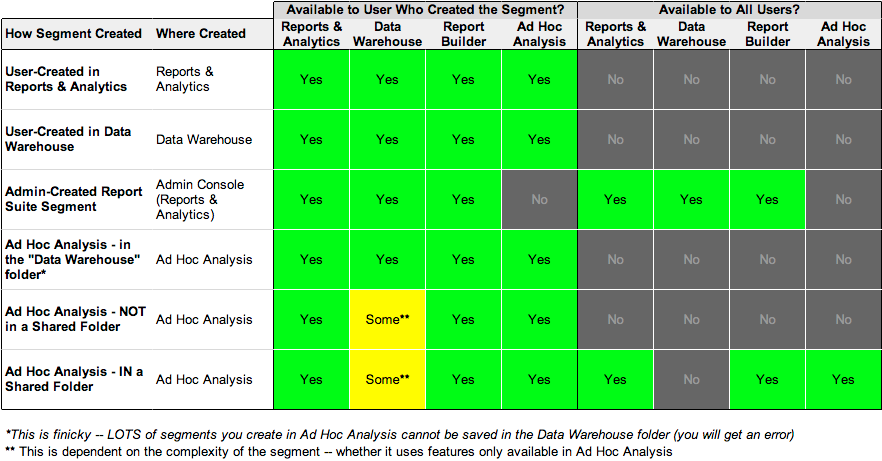 This grid represents a work in progress, but Adobe has done a great job in the last year or two trying to get parity between the different tools and I expect that it will keep getting better. It may yet have some inaccuracies (although one of my Adobe heroes has blessed it since I initially published it), so, if you spot any, please let me know and I’ll do some further testing and validation!