I’m a fan of Stephen Few; pretty much, always have been, and, pretty much, always will be. When developing dashboards, reports, and analysis results, it’s not uncommon at all for me to consciously consider some Few-oriented data visualization principles.

One of those principles is “maximize the data-pixel ratio,” which is a derivation of Edward R. Tufte’s “data-ink ratio.” The concept is pretty simple: devote as much of the non-white space to actually representing data and as little as possible to decoration and structure. It’s a brilliant concept, and I’m closing in on five years since I dedicated an entire blog post to it.

Another Tufte-inspired technique that Few is a big fan of is the “sparkline.” Simply put, a sparkline is a chart that is nothing but the line of data:

In Few’s words (from his book, Information Dashboard Design: The Effective Visual Communication of Data):

Sparklines are not meant to provide the quantitative precision of a normal line graph. Their whole purpose is to provide a quick sense of historical context to enrich the meaning of the measure.

When Few designs (or critiques) a dashboard, he is a fan of sparklines. He believes (rightly), that dashboards need to fit on a single screen (for cognitive processing realities that are beyond the scope of this post), and sparklines are a great way to provide additional context about a metric in a very economical space.

But, still…sparklines are easy to criticize. In different situations, the lack of the following aspects of “context” can be pretty limiting:

So, sparklines aren’t a magic bullet.

So, What’s an Alternative?

While I do use sparklines, I’ve found myself also using “small charts” more often, especially when it comes to KPIs. A small chart, developed with a healthy layer of data-pixel ratio awareness, can be both data-rich and space-economical.

Let’s take the following data set, which is a fictitious set of data showing a site’s conversion rate by day over a two-week period , as well as the conversion rate for the two weeks prior: 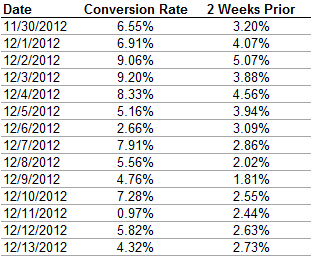 If we just plot the data with Excel’s (utterly horrid) default line chart, it looks like this: 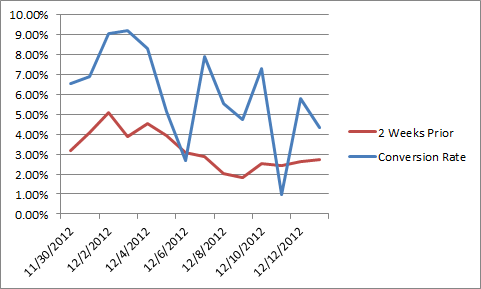 Right off the bat, we can make the chart smaller without losing any data clarity by moving the legend to the top, dropping the “.00” that is on every number in the y-axis, and removing the outer border:

The chart above still has an awful lot of “decoration” and not enough weight for the core data, so let’s drop the font size and color for the axis labels, remove the tick marks from both axes and the line itself from the y-axis, and lighten up the gridlines. And, to make it more clear which is the “main” data, and to make the chart more color-blind friendly in the process, let’s change the “2 Weeks Prior” line to be thinner and gray:

Now, if the fact that the dates are diagonal isn’t bugging you, you’re just not paying attention. Did you realize that you’re head is cocked ever so slightly to the left as you’re reading this post?

We could simply remove the dates entirely:

That certainly removes the diagonal text, and it lets us shrink the chart farther, but it’s a bit extreme — we’ve lost our ability to determine time range covered by the data, and, in the process, we’ve lost an easy way to tell the granularity of the data.

What if, instead, we simply provide the first and last date in the range? We get this:

In this example, I’ve reduced the area of the chart by 60% and (I claim) improved the readability of the data! The “actual value” — either for the last data point or for the entire range — should also be included in the display (next to or above the chart). And, if a convention of the heavy line as the metric and the lighter gray line as the compare is used across the dashboard or the report, then the legend can be removed and the chart size can be farther reduced.

That’s Cool, but How Did You Do Just the First and Last Dates?

Excel doesn’t natively provide a “first and last date only” capability, but it’s still pretty easy to make the chart show up that way.

In this example, I simply added a “Chart Date” column and used the new column for the x-axis labels: 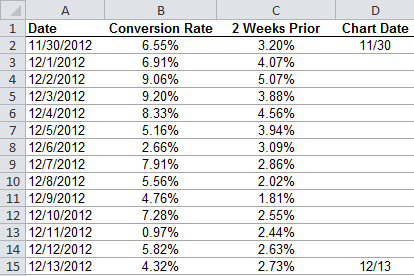 The real-world case that actually inspired this post actually allows the user to change the start and end date for the report, so the number of rows in the underlying data varied. So, rather than simply copying the dates over to that column, I put the following formula in cell D3 and then dragged it down to autofill a number of additional rows. That way, Excel automatically figured out where the “last date” value should be displayed:

What that formula does is look in the main date column, and, if the current row has a date and the next row has no date, then the current row must be the last row, so the date is displayed. Otherwise, the cell is left blank.

Neither a Sparkline Nor a Full Chart Replacement

To be clear, I’m not proposing that a small chart is a replacement for either sparklines or full-on charts. Even these small charts take up much more screen real estate than a sparkline, and small charts aren’t great for showing more than a couple of metrics at once or for including data labels with the actual data values.

But, they’re a nice in-between option that are reasonably high on information content while remaining reasonably tight on screen real estate.