Are You Part of the Measure Slack Community?

Last week was a particularly nice week for me in the Measure Slack team, and, while I tout it every time I speak and at the end of every episode of The Digital Analytics Power Hour, and it’s the first resource listed on our analysts resources page, I realized I’ve never blogged about it. Of course, as soon as I start to write something down, I find myself in the mental pursuit of multiple rabbit holes. But, I think I can keep this fairly brief.

There Used to Be Only One

(If you’re not a history buff, skip this section.)

Just like the digital channel itself, back in the day (“Listen up, you young whippersnapper!”) there was only one online community that had any real meat. That was the Yahoo! Web Analytics group, originally created by Eric Peterson, and then handed over to the (now) Digital Analytics Association. I was an active participant in that group. I credit it with: my initial exposure to Eric, the creation of Columbus Web Analytics Wednesdays (I connected with the two other co-founders of the group through the forum shortly after moving to Ohio in 2007), and much of my early education about web analytics.

If you actually clicked through on the link above, you likely saw a “no activity in the last 7 days.” According to this analysis, that group peaked in 2008.

But, even as the Yahoo! group declined, there really was still only one online community for web analysts: Twitter emerged. Initially, the hashtag we used was #wa, but then the state of Washington started using Twitter, and the hashtag of choice shifted to #measure. That was pretty awesome, too. I’m not even going to begin to try to list all the people I initially connected with through Twitter who have gone on to become good friends, colleagues, and collaborators.

The #measure hashtag on Twitter is still around, but it has become cluttered-cluttered:

I still keep my Twitter app open most days, and I get good content when I scroll through that feed…but it takes some work to separate the wheat from the chaff.

And Now There Are Many Communities

No community for digital analysts is perfect. The main ones I’m aware of are:

Nothing is perfect, but…

I Highly Recommend The Measure Slack 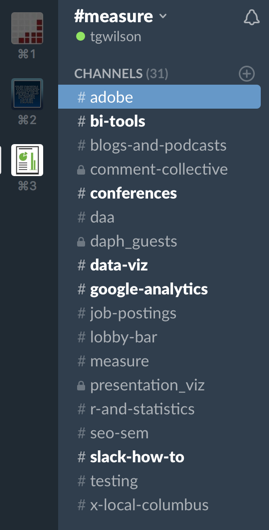 The Measure Slack was created and is spearheaded by Lee Isensee. He’s got a handful of admins who help him out (full disclosure of non-disclosure: I’m not one of them, and they didn’t ask me to write this post), and their focus is on keeping the community community-driven and free of spam and self-promotion. I actually asked Lee about his philosophy (via Slack…in a private message) and he responded:

“Measure Slack is not a benefit by paying a membership fee to an association, nor a service that charges a membership itself. Measure Slack is a forum in which people in digital marketing are able to come together to discuss, hash out, and create shared solutions with those that are willing to contribute. To protect those users, unlike something like Twitter, Yahoo Message, or similar, each user is verified by a Measure Slack admin to avoid SPAM whenever possible.”

So, yes, you have to “apply for membership,” but no one is denied, and it’s free, and only egregious misbehavior gets disciplined (gentle chiding about using the appropriate channel, not cross-posting excessively, etc. is performed through private channels).

The image shown here is my sidebar. Because it’s Slack, it’s highly customizable, but, hopefully, if you’re not already in the platform, this list will give you a good sense of the diversity of the content. I pretty much live in the #r-and-statistics channel these days, and every day or two I click through the other channels that are showing unread messages. The depth and quality of the discussion can’t help but leave me with a sense of pride in our industry and the way that analysts inherently just want to solve problems — whether they’re their own or those of others — and are humble and gracious when hashing out ideas.

A Call to Action

If you’re still reading this, then choose the appropriate CTA below:

I hope to see you there!