This month, in lieu of a formal topic, Dave Culbertson facilitated a round of speed networking — like speed dating, but with the purpose of driving interaction beyond everyone’s immediate tablemates. Each round lasted for 1 minute, and the main challenge was getting people to stop talking and shift on to the next person! It was a little intense, but Dave cut it off after 15-20 minutes, and the overwhelming consensus was that it was fun and useful! 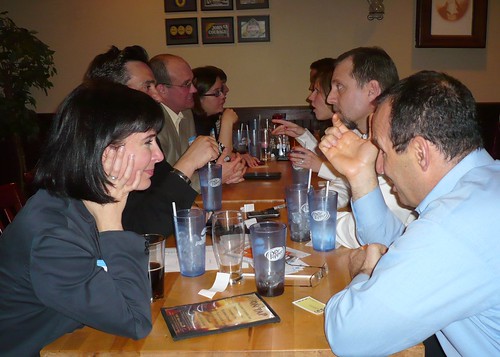 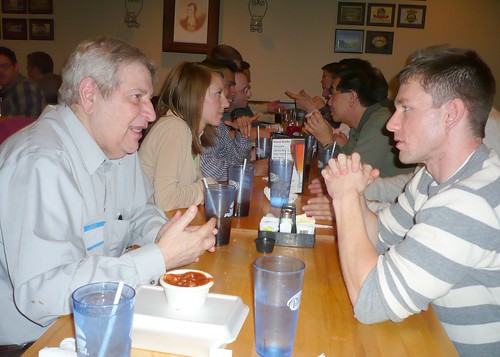 At the end of the exercise, Dave commented that he really hoped we could start extending these 1:1 connections and interactions through social media. As it is, Dave (@daveculbertson) is one of the most interesting people I follow on Twitter, especially when it comes to finding and tweeting links to content that I find interesting and informative. We’d actually thought ahead (if “six hours before the event” counts as “ahead”) and made a sign-up sheet that included a space for the attendees to write their Twitter usernames and indicate if it would be okay to post them. I then proceeded to leave the sign-in sheet behind when I left! Something about Barley’s — last month, I left my notebook behind and had to go and retrieve it the next day (2 beers over 2.5 hours plus a full meal…in case you’re wondering — it’s just something in the air there!).

So, instead, we’re broadening our social media presence. Consider joining one or all of the following, depending on where/how you hang out on the ‘net:

Pick your poison, one or all!

Overall, the event had a great mix of both practicing web analysts (from companies like Resource Interactive, Highlights for Children, Victoria’s Secret, Lightbulb Interactive, Coldwell Banker, …and I’m just rattling off the companies I can remember, so this is an incomplete list) as well as some web analytics-centric companies: BizResearch, ClearSaleing, SearchSpring, and WebTech Analytics (all the way up from Cincinnati!). And, with a handful of sharp people in the crowd who are currently looking for full-time work, it was great that TeamBuilder Search came out as well! From a quick count of faces in my brain, the attendance broke down to be ~25% first-timers, ~25% loooonnnngg-time attendees, and 50% who have attended 1-5 times before. All in all, a great mix!

The most-interesting-but-random site/tool that I learned about this month was City-Data.com — think The World Factbook, but for U.S. cities rather than for countries! And, with a slew of charts that are pretty clean and provide a pretty good way to get the flavor of a town — weather, jobs, houses, and so on.