Actually, THAT’s almost a direct quote. Sarcastic as it may be. We were actually competing with a US-Mexico World Cup qualifying match that was being played in Columbus (in some crazy weather…but I’m getting ahead of myself). The US won 2-0, for what it’s worth, and I’m sure Sasha enjoyed the game. I’ll get an update next month!

This month’s WAW was something of a last-minute adventure. We once again had the event sponsored by the Web Analytics Wednesday Global Sponsors, and we had a drawing for a WASP for Analyst license, which David Ruen won. I’ve got to give a tip of the hat to Sandy and Ben Blanquera for the amazing work they’ve done getting Columbus Tech Life up and running, as we continue to bring in a few fresh faces from the Columbus Tech Life Meetup postings for WAW.

The real adventure this month was that Columbus had projected high winds for Wednesday evening. And, as the day progressed, there were rumors floating around about a Level 2 Storm Alert and 60 mph winds. After a brief flurry of e-mails, we decided that we would go ahead and have WAW, and I sent out a quick note to that effect, but let people know not to worry if they’d registered but then weren’t going to make it due to the weather. Power is still out in some neighborhoods in the area a full day later — the wind lived up to the hype.

I was heading to the event in between one wet-windy-heavy storm and what later turned out to be mostly just high winds storm and caught a pretty spectactular double rainbow out my window. Lucky for me, I was heading to WAW, so had more than just my Blackberry available to snag a picture! 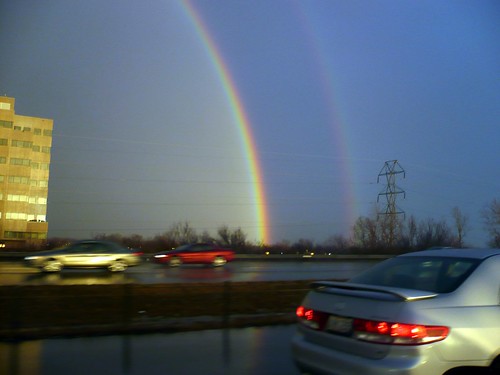 We tried another new venue this month — Bar Louie in the Arena District. And, overall…too loud (a common theme). But, good food and good drink, topped off with a good crowd (we rattled off seven people who intended to come and then didn’t either because of a last-minute conflict or the weather): 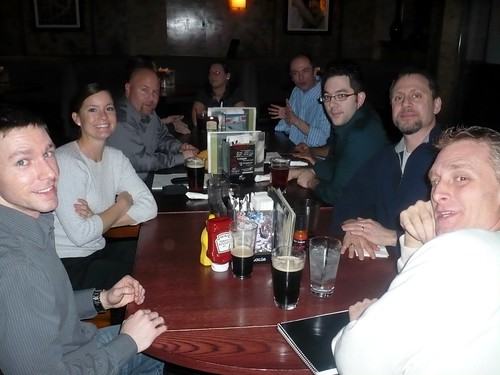 Ironically, Monish Datta — the target of my running gag to make this site dominate organic searches for his name — is almost entirely obscured behind Brian in this picture.

The new faces this month included:

And, oh dear, I’m just not going to get into listing where everyone was from. As always, it was interesting to watch the interactions — the people who realized they actually had worked with each other, but only over the phone, the people who had 2 degrees of separation from each other, and, of course, the web analytics chatter.

Due to the noise level, we only did a half-hearted attempt to run our planned round table question of, “What is the most interesting (or entertaining…or terrifying) example of MISinterpretation of web analytics data you have seen?” We got a few chucklers:

The event started to wind down earlier than normal. I was drifting out myself after 2.5 hours. Dave and Andrew had started to head out earlier, but had gotten engrossed in a conversation and wound up sitting down to finish it. As I walked out, I got engrossed in their conversation. A half-hour later, as I started to leave (again), I realized that a number of Deloitte consultants who I work with had drifted in to watch the UNC-Duke basketball game. I wandered over for a quick, “Hey”…and didn’t leave until 11:15.

Which is why I’m going to end this post here and go to bed!