We blew past our previous attendance record at the latest Columbus Web Analytics Wednesday, and the speaker did not disappoint! We were fortunate to have Eric Peterson in town and extremely lucky to have Foresee as our sponsor — covering the food and drink for a larger-than-initially-predicted turnout, as well as providing a copy of Larry Freed’s new book to each person who asked a question. All in all, the event got a figurative thumbs-up from many of the attendees, and I caught a literal thumbs up from Monish Datta as well: 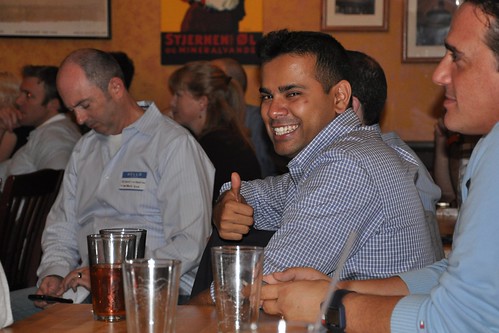 Eric played to a packed house, which he handled with ease: 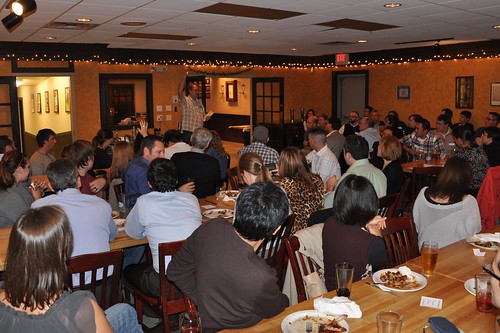 The evening’s format was simply a “Q&A with Eric Peterson.” Knowing our audience, I was confident that the questions would be good ones, and they were!

I’ve used Twitter as a crowdsourced note-taking tool in the past at events like 2011 eMetrics San Francisco, and it has worked out well. So, for this event, I made sure that our standard event hashtag — #cbuswaw — was included on notecards scattered around the room (along with the username for our speaker — @erictpeterson — and our sponsor — @foresee). I set up a TweetReach tracker ahead of the event based on the hashtag and then just sat back and let the “note taking” begin!

For a small networking event in central Ohio, that seemed like plenty of taking of notes! Several attendees were following the stream of tweets and retweeting as various thoughts caught their eyes (counting myself amongst that group), so it’s a reasonable leap, I think, that looking at the “most retweeted” tweets is a quick-and-dirty way to get a  read on what content was most resonant with the in-person audience.

The most retweeted tweets:

Social media was definitely one hot topic, for which Eric had some thoughts about overall maturity and challenges, but he also referred attendees to his partner, John Lovett’s, book on the subject.

There was also a discussion about “standards” for web analytics. Eric had some new and interesting thoughts on that front…but I found out later that he’d been tossing those around in his head for a while and has a draft blog post written on that subject. So, keep an eye on his blog to see if that gets fleshed out.

I honestly don’t remember if it was the social media question or the standards question that led to a discussion of “measuring engagement,” but John Hondroulis managed to dig up Eric’s post from 2007 on the subject and get that shared out to the crowd.

And, the inevitable privacy topic came up, which garnered a few tweets about the WAA’s Code of Ethics.

All in all, it was a fantastic event!