Ahhh…the timeliness of blogging. Not! The latest Web Analytics Wednesday in Columbus was last Tuesday, and I’m just now getting around to posting a brief recap. I’ve been battling a cold all week, which has combined with the mental rigors of starting a new job, and that’s just left me flat-out pooped in the evenings. That’s also my excuse for the lack of blogging overall, which I do hope to correct in the coming weeks, once I get my feet on the ground and figure out both topics and boundaries. So, be patient — no need to unsubscribe just yet!

Back to this month’s Columbus Web Analytics Wednesday. We headed back to O’Shaughnessy’s, and the event was again sponsored by CoreMetrics, Analytics Demystified, and SiteSpect. We had a good turnout: 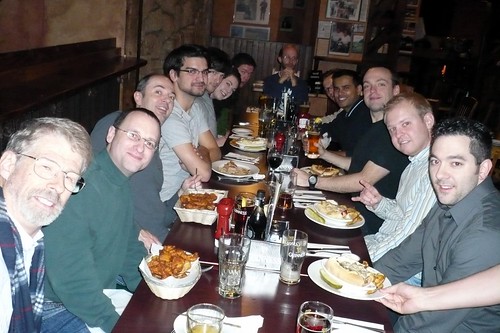 We again teamed up with the Adobe User Group folk, which added some additional perspectives and some new faces. I, for one, had a great conversation about SaaS-based CRM software with a fellow whose company is in that market…but I managed to totally space on the company’s name, even though I asked him for it twice! (See note above about my cold and my new job.)

We now officially have three regulars with recurring conflicts on Tuesday nights. And, this was our second consecutive meeting with no formal speaker. These two factors spawned a discussion that led to a new survey that I did manage to get sent out on Thursday night. Even if you have never attended a Columbus WAW, but you’re interested, I’d appreciate two minutes of your time to get some basic information on your ‘druthers:

Preliminary results are leading me to think we’ll try December’s event on a Wednesday, but I’ll get the data posted here once I’ve got a few more respondents.

That’s about all for this month. Monish Datta again pointed out that I’ve made little headway when it comes to moving up the SEO ladder on searches for his name, so I figured I’d try getting him in the URL and the <title> tag to see if that makes a difference. I’ll stop short of flat-out link baiting. I promise! This is just a recurring diversion that cropped up in our first or second meeting and is now likely destined to continue indefinitely!