I Wonder If chacha.com Came Up at eMetrics?

We had a great Columbus Web Analytics Wednesday last night at The Spaghetti Warehouse, sponsored by CoreMetrics, Analytics Demystified, and SiteSpect. As usual, we held it on a Tuesday, and we went double-rebellious by somewhat inadvertently scheduling it to conflict with eMetrics (which lost us Jonghee and Judy) and with a local pool league (which lost us Nicole).

Nevertheless, we had a healthy turnout, albeit it one that had an exact 1:1 ratio of X to Y chromosomes (think about it): 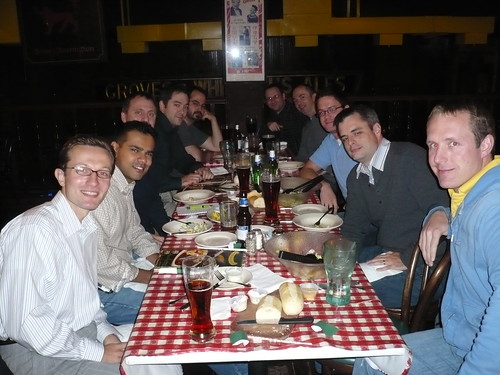 As tends to be the case, we had heavy Coremetrics representation at the event, but we also had a WebTrends company, one company that’s exploring IndexTools, and heavy dabblers in Google Analytics all around.

We didn’t have any formal topic, but both ends of the table had some interesting discussions. On my end, a couple of the big topics were:

We also covered a bit about my pending move to Nationwide, where I’ll be an official co-worker of Bryan C., albeit in a totally different department and not really involved with web analytics. More on that move to come — I expect the number of data management posts here to increase as I get more heavily back into that world.

And, on the “entertaining technology” front, Scott introduced us to chacha.com. It’s a free service where you can call or text in any question, and it will text back an answer. Scott demonstrated by calling and asking “Where do babies come from?” The answer that was returned was accurate, succinct, and, yet, would garner a PG rating on the big screen. I tried it this morning by asking “What is web analytics?” with lesser results:

Off-site web analytics refers to web measurement and analysis irrespective of whether you own or maintain a website.

I’m not sure where the “off-site” came in, but the response included a link with the question and answer: http://search.chacha.com/u/DIffZIPz. And, that link includes a link back to the “Source Website,” which was the Web Analytics Association, so, all in all, not bad for a one-minute response to a random question.

And, finally, Monish Datta said my goal should be for this site to show up as the number one Google result for a search on “Monish Datta.” Currently, I’m on the second page of results, lagging well behind the YouTube photo montage of The Monish set to the tune of Runaway. But, I’ll keep working on that.