What Marketing/Analytics Can Learn from Mythbusters

Earlier this month, I gave a presentation at the Columbus Web Group meetup that I titled Mythbusters: Analytics Edition. The more I worked on the presentation — beating the same drums and mounting the same soapboxes I’ve mounted for years — the more I realized that the Discovery Channel show is actually a pretty useful analog for effective digital analytics. And, since I’m always on the lookout for new and better ways to talk to analysts and marketers about how to break out of the soul-sucking and money-wasting approaches that businesses have developed for barfing data and gnashing teeth about the dearth of “actionable insights,” this one seemed worth trying to write down.

Note: If you’re not familiar with the show…you can just bail on this post now. It’s written with the assumption that the reader actually knows the basic structure and format of the program. 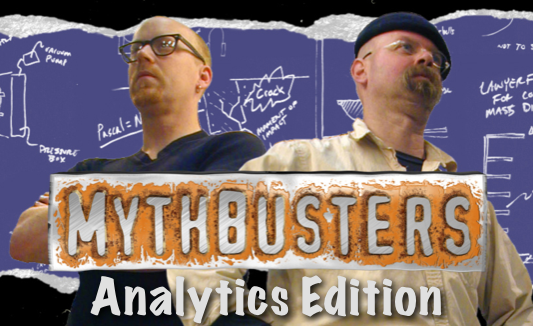 First, a Mythbusters Episode Produced by a Typical Business

When I do a thought experiment of putting an all-too-typical digital marketer and their analytics team in charge of producing a Mythbusters episode, here’s what happens: 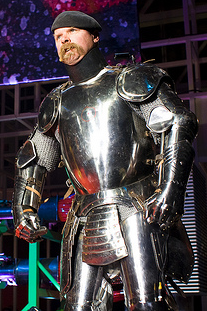 The show’s opening credits roll. Jamie and Adam stand in their workshop and survey the tools they have: welding equipment, explosives, old cars, Buster, ruggedized laptops, high-speed cameras, heavy ropes and chain, sheet metal, plexiglass, remote control triggers, and so on. They chat about which ones seem would be the most fun to do stuff with, and then they head their separate ways to build something cool and interesting.

Jamie and Adam are now reviewing the footage of the whole exercise. They play and replay videos in slow motion from different angles. They freeze-frame the video at the peak of the old car’s trajectory and note how high it went. Then, the following dialogue ensues:

Adam: “That was soooooo cool.”

Jamie: “Right. So, how are we going to judge this myth? Busted, plausible, or confirmed?”

Adam: “Um… what was the myth we were trying to bust?”

Jamie: “Oh. I guess we didn’t actually identify one. We just came up with something cool and did it.”

Adam: “And we measured it!”

Jamie: “That’s right! We measured it! So… busted, plausible, or confirmed?!”

Adam: “Hmmm. I don’t know. I don’t think how high the car went really tells us anything. How loud do you think the explosion was?”

Jamie: “It was pretty loud. Did we measure the sound?”

Adam: “No. We probably should have done that. But…man…that was a bright flash when it blew up! I had to shield my eyes!”

Jamie: “Aha! We have software that will measure the brightness of the flashes from the video footage! Let’s do that!”

[They measure the brightness.]

Jamie: “Yeah. So, have we now done enough analysis to call the myth busted, plausible, or confirmed?”

Jamie: “Oh, yeah. I forgot about that.” [turns to the camera] “Well, we’re about out of time. We’ll be back next week! You know the format, folks! We’ll do this again next week — although we’ll come up with something else we think is cool to build and blow up. Hopefully, we’ll be able to make a busted, plausible, or confirmed call on that episode!”

This is how we’ve somehow managed to train ourselves to treat digital analytics!!!

We produce weekly or monthly reports and expect them to include “analysis and insights.” Yet, like the wrongheaded Mythbusters thought experiment above, we don’t actually ask questions that we want answered.

Sure, We Can Find Stuff Just by Looking

Keeping with the Mythbusters theme and, actually, lifting a slide straight from the presentation I did, what happens — in reality — when we simply point a web analyst to the web analytics platform and tell them to do some analysis and provide some insights for a monthly report? Poking around, clicking into reports, correlating data, even automatically detecting anomalies, we can turn up all sorts of things that don’t help the marketer one whit: 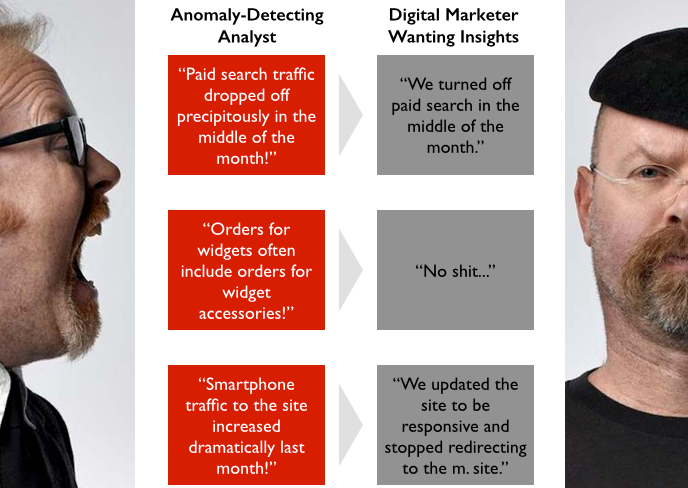 To be clear, the marketer (Jamie) is complicit here. He is the one who expects the analyst to simply dig into the data and “find insights.” But, week in and week out, month in and month out, he gets the report, the report includes “analysis” of the anomalies in the data and other scattershot true-but-not-immediately-relevant findings, but he doesn’t get information that he can immediately and directly act on. (At which point we invoke Einstein’s definition of insanity: “doing the same thing over and over again and expecting different results.”)

“Insights” that are found this way, more often than not, have a perfectly logical and non-actionable explanation. This is what analysis becomes when the analyst is told to simply dig into the data and produce a monthly report with “analysis and insights.”

The Real Mythbusters Actually Gets It Right

Let’s look at how the real Mythbusters show runs:

Granted, the myths they’re testing aren’t ones that lead to future action (just because they demonstrate that a lawn chair with a person on it can be lifted by balloons if you tie enough of them on doesn’t mean they’re going to start promoting a new form of air travel). But, aside from that, the structure of their approach is exactly where marketers could get the most value. It is nothing more and nothing less than a basic application of the scientific method.

Outlining those same exact steps, but in marketing analytics terms:

So clear. So obvious. Yet…so NOT the mainstream reality that I see. I have a lot of theories as to why this is, and it’s becoming a personal mission to change that reality. Are you on board to help? It will be the most mundane revolution, ever…but, who knows? Maybe we’ll at least come up with a cool T-shirt.