Originally written by Analytics Demystified on May 12, 2013

Tiger Woods won his 78th career PGA event on Sunday at The Players Championship. The commentators were tireless in their mentions of the fact that his was Woods’s 300th PGA event start.

I’m a bad golfer and a worse baseball player, but I found myself wanting to combine the two sports by calculating Woods’s “batting average” for PGA tour events. This required two major definitional leaps:

This is a whopper of a stretch, I realize, but stick with me, anyway. 🙂

The batting average math is now simply: with Woods’s win, his career batting average in tour events was 78/300, or .260! In baseball, a “good” hitter bats over .300. Of course, for my definitions to hold up, in real baseball, a player would only get credited with a hit if he hit a game-winning walkoff home run every time he got a hit!

This led me to wonder what Woods’s batting average over his career to date has been. So, using data from Woods’ profile on pgatour.com, I plotted it out (even though Woods was an amateur until 1996, the tournaments he played in before that still counted as PGA tour starts): 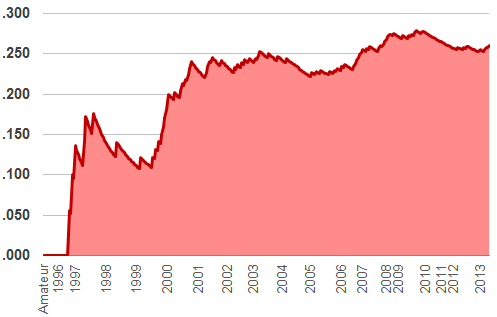 His batting average peaked in 2009, just a couple of months before he had his worst Thanksgiving ever.

As the end of the chart shows, it does look like he is on his way back. Keep in mind that, like a real batting average, the fewer tournaments he’d played in, the more a win would increase his cumulative average and the less a non-win would drop it. That’s one reason that, in baseball, there is more focus on the batting average for the season than on the career batting average.

So, that got me wondering how this tour season compares to Woods’s past seasons. The gray in the chart below shows his average as of the end of each season: 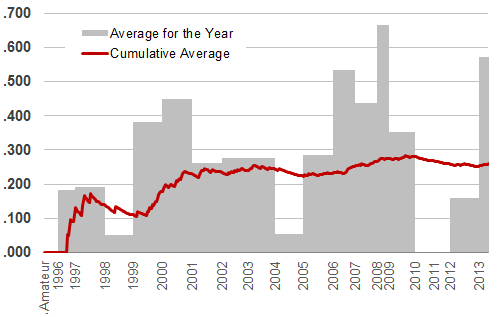