I’m on the plane returning home from the second ever Analytics Demystified ACCELERATE Conference and I can’t help but smile as I think about what an incredible event this was. For starters, demand for this event maxed out the ~200 person capacity of our Chicago venue at the Gleacher Center, but we managed to comfortably squeeze in all of our registered guests as well as everyone who showed up on the waiting list into the room. Of course, Chicago was well represented but there was also a preponderance of Ohio Analysts in the house as well. The OHiO solidarity was reiterated with incessant demands for a Columbus, ACCELERATE sometime in the not too distant future…to which we say, Anything’s possible 😉

Once we kicked off, the room was electrified by Eric Peterson’s inspiring opening comments and you could definitely feel the energy in the air. We promised our attendees a fire hose of content and delivered by honing our “10 Tips in 20 Minutes” format to keep things going at a frenetic but well managed pace. Based on comments and feedback we received, I think it’s safe to say that anyone who was there will tell you that we over-delivered. You can check out the recent Tweets on #ACCELERATE yourself, but I’ll offer up a few notable comments:

Jonghee: Completely satisfied with #ACCELERATE. It’s quality is better than some of the expensive ones. Great job @erictpeterson and the team!

Ableds2: Few industries/professions strive for excellence like this group. I am honored to be surrounded by amazing people #ACCELERATE #measure

One of my responsibilities during ACCELERATE, beyond delivering my 10 Tips on Using a Social Media Measurement Framework was to track the Twitter stream to see what was coming in throughout the day of the conference and who the BIG Tweeters were. I thank TweetReach for providing access to their monitoring tool, which allowed me to conduct my analysis in near-real time as Tweets tagged with #ACCELERATE were flying across the Interwebs. 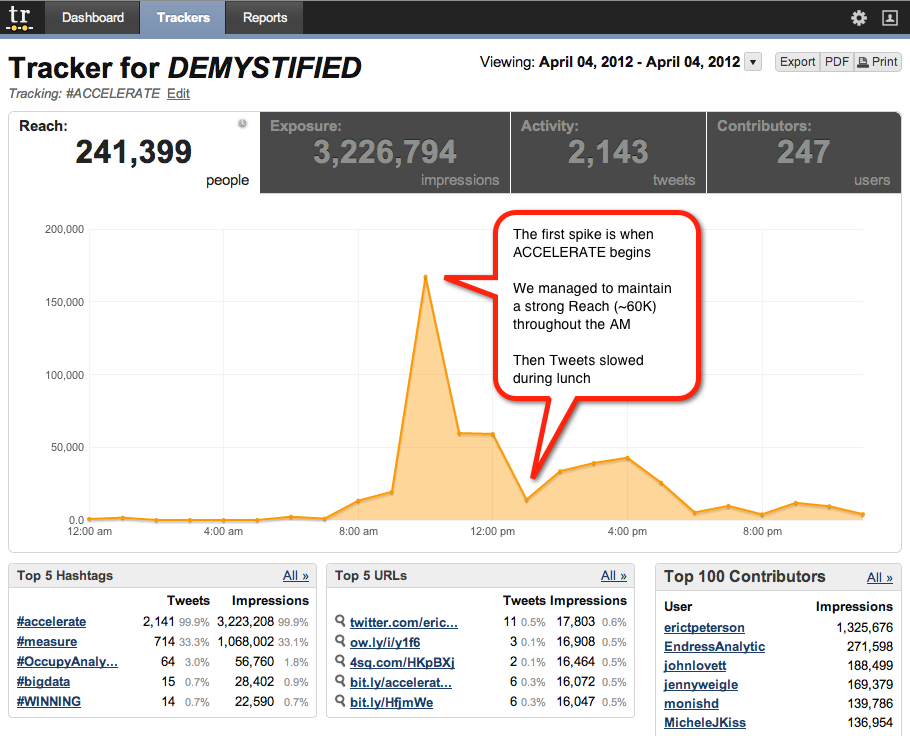 ***Note: My TweetReach Tracker is set up for East Coast time, so this reflects a -1hr Time Zone delay.***

Exposure: (measured in Top Contributors by impressions) We did a pretty good job overall of sharing the love emanating from ACCELERATE on Twitter with 3.23 million impressions reaching an estimated 240k people on April 4, 2012. The 6 top contributors delivered 69% of the total impressions and they included: @EricTPeterson, @EndressAnalytic, @johnlovett, @jennyweigle, @monishd, and @MicheleJKiss (who wasn’t even there!). If you’re looking for folks to get the word out on Twitter, consider this your shortlist.

Velocity: (measured in ReTweets and total impressions) Overall the most re-Tweeted tweet for the 24-hr period was by Erica Chain, who garnered 10 RT’s on her 140 character missive about Joan King’s Crate & Barrel presentation. Note to the velocity Tweeters: pictures get more RT’s! I had a chance to talk with Erica and learned of her amazing story which was an added bonus. But, Monish Datta won our cash money prize for the most Retweeted Tweet as of 3PM. He attained 7 RT’s and over 16k impressions. Monish and team from Victoria’s Secret were well represented at ACCELERATE and they all added great value and velocity to the Tweet stream.

Penetration: (measured as the percentage of #Measure Tweets containing the #ACCELERATE hashtag) Over the course of the day, #ACCELERATE occupied 71.2% of all Tweets on the #Measure. Since we were delivering a fire hose of information during ACCELERATE, we encouraged attendees to Tweet out over our hashtag as well as the #Measure hashtag throughout the day. Apparently they listened because we dominated #Measure by sharing the free content delivered at ACCELERATE with anyone who cared to listen in, one tip at a time. One UK onlooker even commented that either it was lunchtime or Twitter had crashed as our activity came to an abrupt slowdown during our noshing hour.

Impact: (measured as the perceived value generated by ACCELERATE) The true impact of this event is best measured by the actions that attendees will take when they arrive back at their desks and apply their newfound insights into their daily work. While this is a real tough one to quantify, measuring impact on these types of things always is. For me and my Partners at Demystified, we gauge our success by the speaker feedback we receive, the generous donations to our Analysis Exchange scholarship fund, and through the comments that we get from individual attendees. By all measures, this was a smashing success.

In closing, I’d like to issue one last word of thanks to our generous sponsors: Ensighten, ObservePoint, OpinionLab and Tealeaf who made this event possible. And if you missed ACCELERATE Chicago, try to make it to Boston. We’ll be doing it again on October 24th, and we hope to see you there.